Apple CEO Tim Cook on Sunday tweeted that Apple employs 250 so-called "dreamers," or individuals who were brought to the United States at a young age when their parents or guardians illegally immigrated to the country. 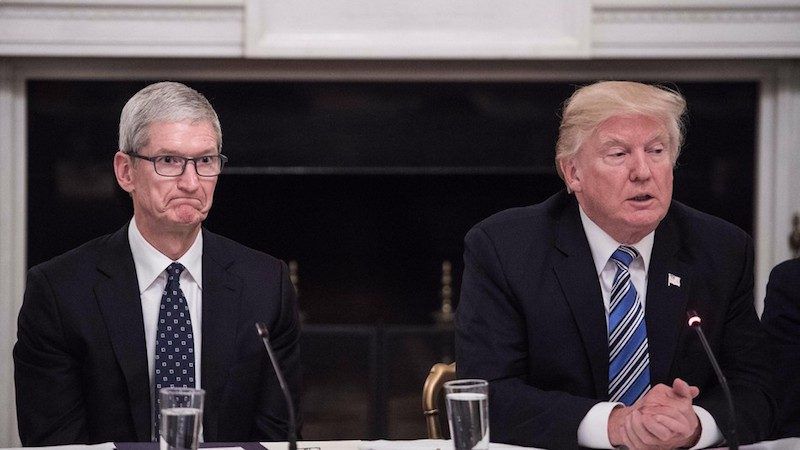 Image: Nicholas Kamm/Associated Free Press/Getty Images
"I stand with them," said Cook. "They deserve our respect as equals and a solution rooted in American values."

250 of my Apple coworkers are #Dreamers. I stand with them. They deserve our respect as equals and a solution rooted in American values. — Tim Cook (@tim_cook) September 3, 2017

Cook's tweet comes shortly before U.S. President Donald Trump is expected to announce whether he will end the Deferred Action for Childhood Arrivals (DACA) immigration program as he promised.

Last week, Cook and around 300 other business leaders signed an open letter urging Trump to preserve the program, and to pass the bipartisan DREAM Act or similar legislation as a permanent solution.

DACA allows many illegal immigrants who entered the United States at age 16 or under to receive a renewable two-year period of deferred action from deportation, and eligibility for a work permit in the country. The program was created by way of an executive order signed by former President Barack Obama in 2012.

Trump vowed to end DACA during his presidential campaign, but he later admitted it would be a tough decision. Trump said young individuals enrolled in the program will be treated with "great heart."

If the program is ended, nearly 800,000 undocumented young individuals that fall under its protections would have the right to work legally until their two-year work permits expire, according to the Immigrant Legal Resource Center.

"Employment Authorization Documents (EADs), also known as work permits, are generally valid until they expire or the government demands they be returned," it said in an advisory posted to its website last week.

It's unclear if U.S. immigration authorities would then target those individuals for deportation, but it's certainly the feared outcome among those protected. Trump's decision is expected to be announced by Tuesday.

Menopause
I'll say this right at the onset: Tim Cook needs to give his left liberal political pandering since November 2016 a bloody effing break. I'm an immigrant from India myself, I currently work for Apple from Germany, I have family in the USA, and before Tim blindly starts defending Dreamers, he needs to read this: https://cis.org/Mortensen/DACA-Granting-Amnesty-Dreamers-Committing-Crimes-While-Abandoning-Their-Victims.

I support some of President Trump's policies and I believe that DACA should be reformulated from the ground up instead of being nullified.

Having said that, Tim Cook of late hasn't ceased downright disgusting me. We get it that Tim is a die-hard Hillary Clinton fan but he just can't seem to be able to keep his head out of politics.

KKK, Nazis, white supremacsists are vile, demented creatures—there's no defending ANYTHING they stand for. But where are Cook's Twitter condemnations and fundraising against rabidly hateful and intolerant leftist groups like Antifa, who (quite literally!) burn down every single free speech rally at college campuses without a single consequence?

What happens to his voice when Islamists openly urge for a Jewish genocide in America in the name of "freeing Palestine"?!

Where is this coward when cop-killing BLM groups conduct riots, vandalize local businesses, loot, destroy for months in a row during the 2-term presidency of a black man!?

In which hole in the ground does Tim Cook hide when rabid feminists take the stage—physically or on mainstream media—and demand the systematic suffering of men, especially white males in America?

As a brown man that has seen plenty of these pseudoliberals in my own country, there's nothing worse than a duplicitous, hypocritical COWARD with connections to influence, and tons of cash to spend toward their own agenda.

Tim, take your private jet and come see the state of Germany after it took in 3 million undocumented immigrants. Roam around Düsseldorf for a while, then take a flight to Paris and then drop in at Rome after that. Maybe what you will witness will help you SHUT your mouth and have you consider focusing on your goddam job again.
Score: 197 Votes (Like | Disagree)

1applerules1
American citizens come before dreamers. If they want jobs here, they need to be naturalized. I Support President Trump
Score: 117 Votes (Like | Disagree)

Are you serious? Like do you honestly not have a clue about world history or something? There is a distinct difference between moving into an unsettled & ungoverned land and sneaking into an established country with laws and government.

Dilster3k
Aren't all Americans illegal immigrants in a way? Why was it okay hundreds of years ago? Hypocrites.
Score: 99 Votes (Like | Disagree)

The Mad Mule
That is an amazing photo.
Score: 94 Votes (Like | Disagree)

Aren't all Americans illegal immigrants in a way? Why was it okay hundreds of years ago? Hypocrites.

Are you serious? Like do you honestly not have a clue about world history or something? There is a distinct difference between moving into an unsettled & ungoverned land and sneaking into an established country with laws and government.
Score: 91 Votes (Like | Disagree)
Read All Comments