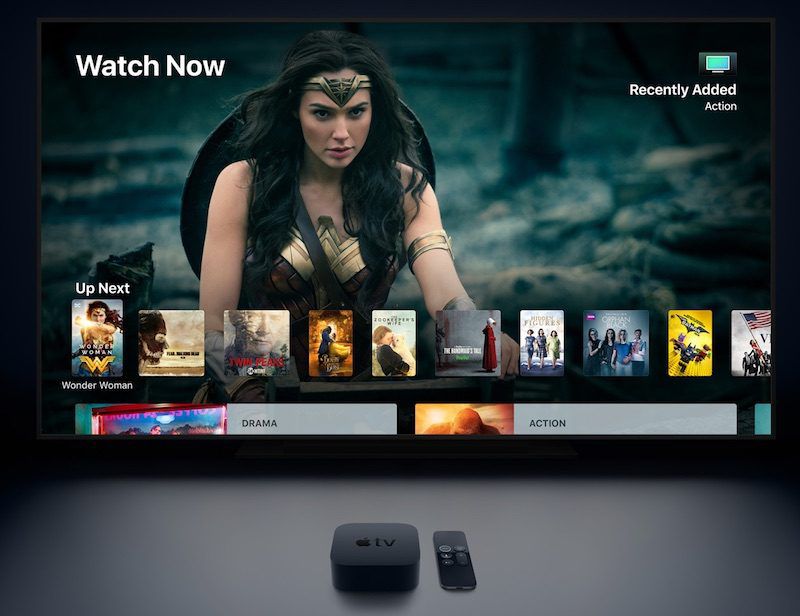 The new Apple TV 4K supports HDR in both the HDR10 and Dolby Vision standards.

Apple TV 4K is powered by an Apple A10X chip, which delivers up to two times the CPU performance and up to four times the GPU performance compared to the previous-generation Apple TV.

Apple services chief Eddy Cue said the price of 4K HDR movies on iTunes will be the same price as HD movies, and users will get automatic upgrades of HD titles in their existing iTunes library to 4K HDR versions when they become available for no additional charge.

4K content will also be available from popular services such as Netflix and Amazon Prime Video on the new Apple TV coming soon.

With support for AirPlay 2, coming later this year, Apple TV can control multiple AirPlay 2-compatible speakers as well as your home theater speakers to create the ultimate home music experience.

The fourth-generation Apple TV did not receive a price cut and remains available for $149.

goodcow
They should've dropped the 1080p model to $99, and introduced the 4K model at $149. But no, Tim had to be greedy again. I guess becoming urban planners, with their town squares, has a lot of overhead. Meanwhile, a 4K Roku is $60. Ridiculous.
Rating: 24 Votes

sblemmy
The free 4K movie upgrade and pricing structure is pretty nice. I'll pick one up and put the 4th gen in a bedroom.
Rating: 19 Votes

TrackZ
No Atmos. Everything else is so good. I swear to God, there always has to be a freaking something or another. How could you possibly skip Atmos and go all the way doing Dolby Vision?!?
Rating: 9 Votes

Can you get an HDMI splitter and run two HDMI devices?

Or get a modern AV receiver. These days even entry level models can do 4K/60 with HDR passthrough.
Rating: 8 Votes

Aussi3
This version will be making me consider getting a Apple TV
Rating: 7 Votes

CaneCollegeboy
20 dollars for 4k movies is the real story here. This will force Amazon, Google and VUDU to lower their 29.99 price
Rating: 5 Votes

That’s comparing digital to physical. With a digital copy and family share I can have 4 people stream the same movie at the same time in different locations. To get anything close to that I would need 4 physical disks costing 13x4 = 52 dollars. It all depends what your needs are.

I agree which is why I'm asking what is the leading factor that would get people to buy an ATV over a Roku ?


Well if you are already a part of Apple’s ecosystem. Getting an Apple TV just makes sense.
Rating: 4 Votes

Why would an ATV be a better buy then a Roku ?


That question can be asked of all Apple products. But that doesn’t stop them from becoming industry leaders. Sometimes price is not always the leading factor.
Rating: 3 Votes