Apple has begun sharing tips to users on iPhone and iPad concerning the newest features of iOS 11, which is expected to debut sometime later this month. Users on Twitter and Reddit pointed out the new iOS 11 Tips section starting last night, noticing a few push notifications that encouraged them to read up on tips for Control Center, Siri Translate, the new iPad Dock, and more. 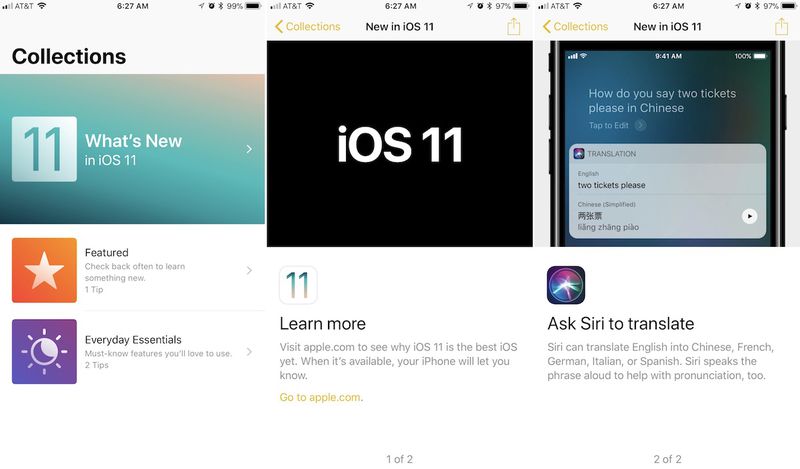 Users on iOS 10 in multiple countries are sharing the new additions within Tips, which allows Apple to prepare those on the current version of iOS for the impending launch of iOS 11. Looking back at previous release schedules for iOS versions, Apple typically launches the new iOS to the public about one week after its fall iPhone event, and two days before the debut of the new iPhone devices, with a few exceptions.

This year, the iPhone event is on September 12, while the so-called iPhone 8, iPhone 7s, and iPhone 7s Plus are predicted to debut on September 22. This would place the official public release of iOS 11 around September 20, although Apple could decide to release iOS 11 a bit earlier ahead of the iPhone launch, like it did in 2015 and to a lesser extent in 2016.

Apple is starting to use the Tips app to prepare users for some rather large changes in iOS 11’s operation and functionality. #iOS pic.twitter.com/FePjGbn1eh

When it launches, iOS 11 will bring about a few notable changes to the iPhone and iPad operating system for its users, including peer to peer Apple Pay, improvements to Siri, Do Not Disturb While Driving, Control Center customization, and many overhauls to the UI and dock functionality on iPad. With less than a week to go until Apple officially announces the release date of iOS 11, along with the unveiling of the iPhone 8, be sure to follow the @MacRumors and @MacRumorsLive Twitter accounts on September 12 for all the latest information.

All you need to do is press on the left edge of your iPhone’s display, then drag your finger or thumb towards the center of the screen. The app switcher will appear immediately, and you’ll be able to quickly find and dive into the app you want.


Aaaahhh that’s what I’m missing. I thought that might’ve been the case since I couldn’t replicate the press and swipe from the home screen.
Anyway I just hope people don’t read your post and think the app switcher is gone completely. Maybe that’s all on me the way I read it.
Rating: 1 Votes
[ Read All Comments ]