In a letter submitted during the Restoring Internet Freedom comment period, Apple has urged the U.S. Federal Communications Commission not to roll back regulations that prevent "paid fast lanes" on the internet. 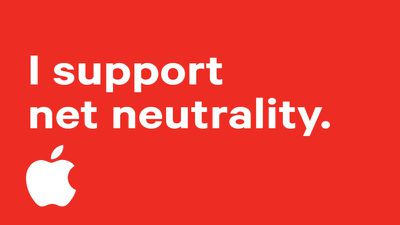 Apple warns that paid fast lanes could result in an "internet with distorted competition" based on an online provider's ability or willingness to pay, which in turn could put some customers in the "slow lane."

Consumers today seek out the content and services they desire based upon numerous factors, including quality, innovation, ease of use, and privacy considerations. Paid fast lanes could replace today’s content-neutral transmission of internet traffic with differential treatment of content based on an online providers' ability or willingness to pay. The result would be an internet with distorted competition where online providers are driven to reach deals with broadband providers or risk being stuck in the slow lane and losing customers due to lower quality service. Moreover, it could create artificial barriers to entry for new online services, making it harder for tomorrow’s innovations to attract investment and succeed. Worst of all, it could allow a broadband provider, not the consumer, to pick internet winners and losers, based on a broadband provider's priorities rather than the quality of the service.

In May, under the leadership of chairman Ajit Pai, the FCC proposed to roll back the Barack Obama administration's classification of internet providers as "common carriers" under Title II of the Communications Act of 1934.

Apple is far from the only major technology company that has urged the FCC to reconsider its proposal. Last month, companies including Amazon, Google, Twitter, and Netflix hosted an internet-wide day of action to save net neutrality.

The FCC received a record-breaking 22 million comments from the public during the comment period, which closed Wednesday. The FCC will now revise and vote on the proposal, at which point it could become official policy.

emvath
Thank you Apple. We need more "big dogs" in this fight. I know Amazon, Netflix (eventually), and a few others have joined in. We need Google, Microsoft, etc. to help.
Score: 21 Votes (Like | Disagree)

cmwade77
Here is what happens if the ban is rolled back:

* ISPs will favor their own content, especially cable companies and such.
* Streaming services, especially Video will have to pay for the fast lanes or be unusable.


And it WAS starting to happen when the ban was put in place, just not quite common practice for all ISPs yet, but many were throttling all video content that wasn't their own and it was indeed proven by using VPNs to get around it, but then they found ways to prevent the VPNs from working.

Overall reversing this ban would be bad for the consumer, bad for most companies, except ISPs, it would be good for them and ultimately bad for the economy as many of the smaller streaming services would essentially be forced to close up shop since their content couldn't be received.
Score: 16 Votes (Like | Disagree)

RRmalvado
This isn't a partisan issue.
Score: 15 Votes (Like | Disagree)

My brain can't get past "...not to roll back a ban that would allow for so-called 'paid fast lanes' on the internet".

It's almost like those who want to end net neutrality have tried to definitely not not obfuscate it as much as not impossible!

Apple is correct on this.
Score: 9 Votes (Like | Disagree)

MrX8503
Here's the thing, everyone wants a faster and cheaper internet, but how that's achieved is being totally obfuscated by Ajit Pai. He is lying to the American public that less regulations would mean ISPs would have more freedom to expand/advance infrastructure. Why would ISPs need less regulation when they have ZERO competition? Most Americans only have 1-2 ISP choices and that's the part Ajit Pai conveniently leaves out.

Why is cellular service costs decreasing? Competition between Verizon, AT&T, T-Mobile, and Sprint.

Why is home internet costs increasing? No competition between Comcast and Time Warner. In fact they've agreed to not cross each other's market.
Score: 9 Votes (Like | Disagree)

shansoft
Stop voting for some random buffoon then this will not happen.

Which buffoon put Ajit Pai into FCC in first place? Who put that buffoon in power? Answer is obvious....
Score: 7 Votes (Like | Disagree)
Read All Comments