The National Academy of Television Arts and Sciences today announced the recipients of the 69th annual Technology & Engineering Emmy Awards, with Apple winning an award in the "Contextual Voice Navigation for Discovering and Interacting with TV Content" category.

Apple received the award for the Siri voice integration built into the fourth-generation Apple TV, which allows users to search for content using voice-based commands. Other winners in the same category include Comcast, Universal Electronics (UEI), and Nuance Dragon TV. 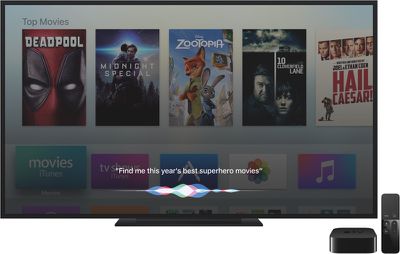 Siri has been available on Apple TV since 2015, which is when the fourth-generation set-top box with tvOS became available for purchase. Siri has a range of functions on the device, ranging from TV show/movie/actor/topic search capabilities to features like a vocal rewind option that allows users to do things like ask "What did she say?" to jump back 15 seconds and temporarily turn on subtitles.

Siri can open apps and games, respond to typical commands for information about sports scores, movie times, weather, and more, and Siri can answer questions about movies and TV shows. "Who directed this movie?" and "Who stars in this movie?" are just a couple of examples of the kinds of queries Siri can respond to. Siri can even answer complex topic-based requests, like "Find comedies from the 80s starring Chevy Chase" or "Find movies for kids from the 90s."

Award recipients will be honored at the Technology & Engineering Emmy Awards at the National Association of Broadcasters on Sunday, April 8, 2018 in Las Vegas, Nevada.

CanadianGuy
Something tells me they didn't even try Siri for long before giving out the award. Or it won by default? Siri on Apple TV is awfully frustrating sometimes. When you say "Rewind 30 seconds" while watching a show, and it replies with "I can't find anything called 'Rewind 30 seconds'", you have to wonder what the hell is going on. It actually understood the voice, and completely messed up the context/instruction.
Score: 16 Votes (Like | Disagree)

RosOne
Wait a sec, my ATV4 has Siri?! Ah, totally forgot I live in a third world country in the EU
Score: 14 Votes (Like | Disagree)

avanpelt
I guess they're just handing out Emmys now if Apple can get one for Siri on tvOS.

Siri works about as well on tvOS as it does on iOS, in my experience. Across all of my Siri-enabled devices, none of the rooms in my home that have HomeKit devices in them can start with the same letter because Siri apparently thinks "Front Room" sounds like "Family Room" and vice-versa over 90% of the time.

About half the time I ask Siri something on tvOS, it says, "Sorry, I can't do that here."

Not a great user experience, IMO.
Score: 14 Votes (Like | Disagree)

AngerDanger
Here's to hoping some of those Emmy-winning engineers make their way back to iOS Siri. I recently created a reminder and was treated to this non-sequitur:

Siri, you asked me the followup question, so you should know what the original context was!

As someone said in another thread, Siri actually works really well on tvOS. Not sure why it’s not great in iOS.

PowerMacBook
Siri doesn't work in Europe.
The remote control doesn't work 50% as the idiot who thought this was handy "designed" it such a symmetric thing, you never know/feel what side is what.
Oh wait, that doesn't matter, as it has Siri!
Siri doesn't work in Europe.
Oh wait, the idiot that "designed" the remote is coming from Europe.
Oh wait, he too received (many) awards for his designs.
Like making a remote of glass.
But it doesn't matter, as the Apple TV is just a hobby.
Steve said so...
must be true