Samsung today sent out invitations announcing an upcoming Unpacked event set to be held on August 23 in New York City.

The South Korean company is widely expected to introduce its next-generation Galaxy Note device at the event, with the new smartphone hinted at through a "Do Bigger Things" slogan and a stylized image of an S Pen next to a smartphone-sized device. 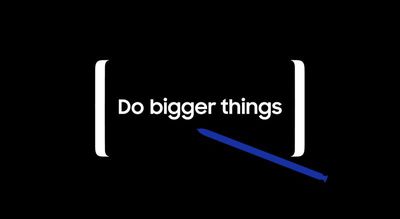 Rumors suggest the upcoming Galaxy Note 8 will feature a design that's similar to the existing Galaxy S8 with thin bezels, rounded corners, and a 12-megapixel dual-lens camera system. It is expected to feature a larger curved display than the Galaxy S8 and S8 Plus, measuring in at 6.3 inches.

Samsung's upcoming Galaxy Note device will be the first since the ill-fated Galaxy Note 7, which the company was forced to recall after exploding batteries caused problems in both original Note 7 devices and their replacements.

The recall and the exploding Note 7 devices were highly publicized, even leading to an FAA ban that prevented them from being carried on airplanes. The debacle cost Samsung up to $5.4 billion, but Samsung is reportedly intent on continuing to use the Note brand despite the incident.

To avoid future problems and to assuage customer fears, Samsung has implemented an 8-Point Battery Safety Check procedure that involves putting all batteries used in Samsung devices through "extreme testing, inside and out, followed by careful inspection by X-ray and the human eye."

Samsung's Galaxy Note 8 will come just a few weeks before Apple is expected to introduce its highly anticipated iPhone 8, which is rumored to feature an edge-to-edge OLED display, a vertical dual-lens rear camera, a faster A11 processor, and a front-facing camera equipped with 3D sensors to enable AR and facial recognition features.

drinkingtea
I just switched to a Galaxy S8+ after only ever owning iPhones. I love it; the OS is stable and fluid. I can't see myself going back to an iPhone.
Score: 28 Votes (Like | Disagree)

Do we really have to have Samsung stuff on the front page?

Although I have no intention of owning a non-iPhone, I do appreciate MR reporting on Apple's competition. It allows for good analysis and comparison of Apple's products against the alternatives.
Score: 21 Votes (Like | Disagree)

to assuage customer fears, Samsung has implemented ('http://www.samsung.com/us/explore/committed-to-quality/') an 8-Point Battery Safety Check procedure that involves putting all batteries used in Samsung devices through "extreme testing, inside and out, followed by careful inspection by X-ray and the human eye."

You mean they weren't doing that before? :eek:
Score: 15 Votes (Like | Disagree)
Read All Comments