Aetna already offers a program that provides the Apple Watch at no cost to its 50,000 employees and subsidizes the cost for some subscribers, but the insurance company is said to be negotiating with Apple to offer a free or discounted Apple Watch to all Aetna members. 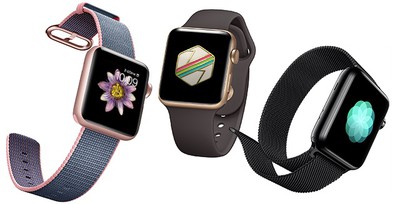 Aetna is said to be aiming to implement some kind of program early in 2018, and its goal seems to be an expansion of plans that were announced back in September. At that time, Aetna said it was planning to subsidize the cost of the Apple Watch for large employers and individual customers.

The company's plan to offer discounted or free Apple Watch models to subscribers comes as Apple is on the verge of introducing a third-generation Apple Watch. Rumors suggest the upcoming device features an LTE chip that allows it to be decoupled from the iPhone and there's also a possibility we'll see a redesign.

We expect to see the third-generation Apple Watch introduced alongside new iPhones in September.

ksnell
My question is what kind of health data access will they require you to give up in order to get the free Watch. We all know nothing is "free."
Score: 21 Votes (Like | Disagree)

moz5835
Why on earth would anyone let an insurance company monitor their health data? This is not going to end well for the consumer.
Score: 15 Votes (Like | Disagree)

Analog Kid
I can understand "discounted" as a marketing effort on Aetna's part, but free always makes me nervous. Free means they see value in the data, will probably demand access to and ownership of the data, and US insurance companies have a track record of trying to find any reason they can to deny coverage.

Offered by doctors as part of a health maintenance plan for specific conditions to reduce the number of office visits, I'm on board with. Offered by insurance companies to everyone without an obvious need? I'm skeptical.
Score: 12 Votes (Like | Disagree)

jonnysods
Its a great idea. Since having my watch I'm easily down 20lbs.
Score: 9 Votes (Like | Disagree)

rjohnstone
Nothing is "free". You will pay for it via premium increases.

Pretty sure they'll be data mining your activity, or lack thereof, so they can use it in calculating your premiums and/or deductibles.
No HIPPA release required since they already have it when you signed up for coverage. ;)
Score: 9 Votes (Like | Disagree)

You’re now paying for other people’s Apple Watches in your insurance!

Also, have small kids? Have an hobby? Work for long hours? Simply don’t like to go to gym? The hell with you! You’re an unhealthy person! Pay more for your insurance, so people that go to the gym pay less!

Do you enjoy going to the gym? Well, better keep going, because you don’t want to pay more for health insurance, do you? Want to rest today? No chance! Or it will be expensive to your wallet.

People need to get one thing straight: “once you give up your privacy, you’ll never do anything out of pure free will”
Score: 8 Votes (Like | Disagree)
Read All Comments

Monday June 21, 2021 7:17 am PDT by Hartley Charlton
Users appear to be underwhelmed by Apple's upcoming iOS 15 and iPadOS 15 updates, according to the findings of a new survey by SellCell. The survey asked 3,000 iPhone and iPad users, evenly split between men and women, aged 18 or over in the United States, what they thought of iOS 15, iPadOS 15, and the naming of the upcoming iPhone 13 lineup. Over 50 percent of all of the survey's...
Read Full Article • 327 comments

Monday June 21, 2021 7:07 am PDT by Joe Rossignol
Following widespread reports that the iPhone 12 mini has experienced poor sales performance, at least relative to other iPhone 12 models, Taiwanese research firm TrendForce today claimed that production of the device has already ended. According to TrendForce, the iPhone 12 mini "reached End-of-Life ahead of time" during the second quarter of 2021, suggesting that Apple will focus on selling ...
Read Full Article • 157 comments