Beta testers who have signed up for Apple's beta testing program are able to download the third macOS High Sierra beta through the Software Update mechanism in the Mac App Store after the proper profile has been installed. 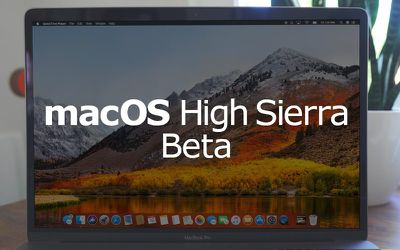 Those who want to be a part of Apple's beta testing program can sign up to participate through the beta testing website, which gives users access to iOS, macOS, and tvOS betas. For instructions on how to install the public beta, check out our how to, and make sure to make a backup before giving the software a try. Don't install the beta on a main machine, as betas are notoriously unstable. High Sierra runs on all machines that support Sierra.

Subscribe to the MacRumors YouTube channel for more videos.
High Efficiency Video Encoding (HEVC aka H.265) is coming in High Sierra, and many of the existing apps are being updated. Photos features a new persistent side view and editing tools for Curves, Selective Color, and Live Photos, while Siri is gaining a more natural voice and support for more music-related commands.

Safari offers a new autoplay blocking feature for videos and Intelligent Tracking Prevention to protect your privacy, while Mail storage is being optimized to take up 35 percent less space. iMessages can now be stored in iCloud, and there are new iCloud Drive file sharing options and new iCloud storage family plans.

Crazy Badger
Updated without any issues, but it's too slow to test anything at the minute. Will let Spotlight do it's stuff and play tomorrow, although I did notice iTunes 12.6.2 downloaded with it and that crashes when opening.

I'd be expecting another 2-4 PB's before we're getting close to a GM.
Score: 2 Votes (Like | Disagree)

Lycanthrope
Sincerely hope this is an improvement on beta 2! Machine has been running like an oven the last couple of weeks...
Score: 2 Votes (Like | Disagree)

If there are any testers reading this comment; is it close to being released to the public yet?

It runs pretty well, there is the occasional bug but other than that I using it on my daily Mac and I have no issues.
Score: 2 Votes (Like | Disagree)

LarryJoe33
Yes, it comes up immediately
Score: 1 Votes (Like | Disagree)

Did you reload the update page in the App store? (cmd+r), it never shows for me either if i just click on the update tab

Reloaded several times. Quit app store and came back to it. No update showed until I re-downloaded the beta profile.

Interesting note: On the updates installed list, it says I have the High Sierra Developer Version 4 installed and Version 3 before that. Usually it says that it's the Public Beta. I realize they are the same, but interesting how it's now listed as the Developer Beta on my machine. I assure you, I am not a developer.
Score: 1 Votes (Like | Disagree)

dogslobber
I didn’t see the PowerPC build, only Intel?!?
Score: 1 Votes (Like | Disagree)
Read All Comments