Last November, Adobe previewed its next-generation photo editor, Project Nimbus, which boasts a focus on cloud storage and simplified editing controls, telling users to expect a beta sometime in 2017. Although that beta has yet to arrive, some users of Adobe's Creative Cloud recently had access to an "internal only" download of Project Nimbus on both Mac and Windows devices. 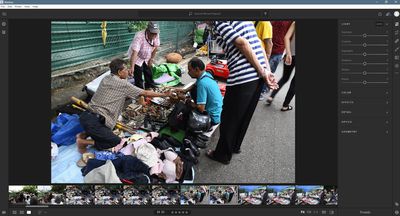 Image via DPReview forums member trenzterra
The site described Project Nimbus as a complement to Lightroom, not a replacement, and ultimately said that the interface is "actually much closer to Lightroom for iPad than Lightroom for Mac / Windows." Thanks to half a dozen simplified and "general" editing tools and the ability to transfer edits in the cloud, MacGeneration also compared Project Nimbus closely with Apple's iCloud photo library.


Compared to Lightroom, which Nimbus does not replace but complete, the interface is less loaded and there is no segmentation in modules (library, development, printing ...). The editing tools are not all stacked in the right column, there is a palette of tools to the Photoshop which includes half a dozen general tools: Basic tools (light, color, effects, details, optics, geometry); Refraction; Correct; Brush; Linear gradient; Radial gradient; and Options (copy / paste settings, view original, return to original, display histogram, single panel mode, edit in Photoshop).

In the end, Project Nimbus is not a substitute for Lightroom, which should continue to evolve on its own, but an iCloud photo library in Adobe sauce. It remains to be seen whether this new service will be adopted by the usual users of Lightroom and whether it will attract new customers.

The leak provided information on cloud storage included with Project Nimbus, which will give users 1TB of storage in the cloud to facilitate the software's goal of cross-platform editing. During the announcement, Adobe specifically described Project Nimbus as "cloud-native," with non-destructive image edits that are saved across all platforms that the software is available on and that users are signed into.

Last week, Adobe updated Lightroom for iOS, bringing a new selective brush, a details tab, a refreshed interface for the iPad, and enhanced support for features like the Apple Pencil and 3D Touch.

Jimmy James
They took it down in a flash.
Score: 14 Votes (Like | Disagree)

They took it down in a flash.

macduke
What would be ideal is if Adobe would build a product that could hook into any cloud source—not just their own—and use that to manage their library. It would be even better if we could do this with iCloud Photos. Basically I want the catalog organization from Lightroom merged with iCloud Photos so all of my iPhone photos and RAW dSLR/mirrorless photos are together in one big library that can be organized, starred, picked and edited. Right now my iPhone and RAW photos are all vomited into iCloud Photos in one big pile and I have to scroll through them all with Lightroom Mobile and pick out a few favorites to edit. Also the "cloud" is still pretty slow, especially for professional photographers. I mean, for crying out loud, I've been researching portable SSDs because portable hard drives are too slow when it comes to loading up and browsing libraries. They want the internet to replace drives when time is money? HAH. I mean, it's good to work towards things like this, and it might be a decent consumer-grade product. But consumers don't like paying for software any more. Google, Facebook and others have ruined that. I don't see why they can't just build in cloud support to existing products.
Score: 3 Votes (Like | Disagree)

PortableLover
Well that was a quick exposure.

(I tried)
Score: 1 Votes (Like | Disagree)
Read All Comments