According to Panic, everything from the core file transfer engine to the "Get Info" experience was entirely rethought, overhauled, and improved, for an even better file management experience. 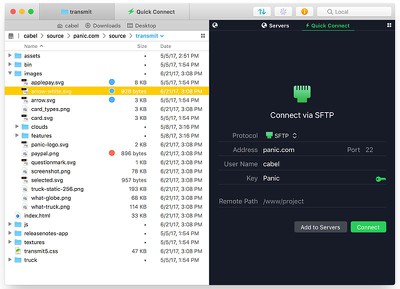 For those unfamiliar with Transmit, it's designed to allow users to upload, download, and manage files on local and remote servers, turning file management into a simple drag-and-drop affair with a clean easy-to-use interface. Transmit 5 works with FTP, SFTP, WebDAV, and S3, and it connects to Backblaze B2, Box, Google Drive, DreamObjects, Dropbox, Microsoft Azure, and Rackspace.

The new version of Transmit also features Panic Sync, designed to offer a quick and safe way to sync sites and keep Panic data up to date across all apps and devices. Panic Sync is part of another major change - Transmit 5's absence from the Mac App Store.

Panic will not be releasing Transmit 5 in the Mac App Store, which, the company explains, is due to its inability to offer a demo through Apple's storefront. "This allows us to distribute a demo which we think is extremely helpful for people considering Transmit," reads an FAQ on the blog post announcing the release.

Panic says the company plans to "constantly re-evaluate" the Mac App Store and hopes to return at some point, presumably if Apple introduces a wider range of features for developers, such as free trials and demos.

Transmit 5 is priced at $35 for the next week, and after that, the price will go up to $45. There is no upgrade discount for customers who have purchased an earlier version of Transmit, but those who purchased Transmit 4 after June 1 can get a free update.

A free trial is available from the Transmit 5 website for those who would like to try Transmit before making a purchase.

I’m kind of annoyed by the lack of upgrade pricing. I just bought Transmit 4 in May smh

Q: What if I just bought Transmit 4?
A: We’ve got you covered! If you bought from us after June 1st (or maybe even a little earlier), grab your Transmit 4 serial number and go here. ('https://panic.com/transmit/upgrade.html') If you bought from the Mac App Store in that timeframe, please send us an e-mail and we’ll help you out.

With that little bit in the parenthesis, I would reach out to them and see if they'll make an exception for you...
Score: 3 Votes (Like | Disagree)

Westside guy
The kind of people who use this sort of app are likely not going to be particularly bothered that it's not in the mac app store.

Me, I'll just continue to use the command line. While we still have one. :D
Score: 3 Votes (Like | Disagree)

I'm not surprised it's not on the Mac app store. Apples 30% cut on desktop software is really quite a lot for developers (of which I am one). You can take payments using Stripe easily and they will only take about 1.4%-2.9% of a sale so if you have an hour free to implement Stripe on your website you can keep the other 27.1%-28.5% that Apple would take.

Their 30% works on the iPhone because there's no way to sideload apps but on the Mac it doesn't work that way.

30% is nothing as they will get way more exposure. My GF never reads random  blogs to get to know news like this, but she always clicks that Store icon in the dock, and quite often buys stuff.

And I'm sure that was all the rage in the 90's. For real are you comparing free internet distribution that 99% of all software now uses to .. putting boxed copies of software at Fry's?

Tell me how do you even load the software on your Mac from such a shop? Our Macs don't even have optical drives anymore and haven't for many years now. The software sections of brick and mortar stores are barren.

And as a software developer I can tell you that internet retailers do not take 40-50%, not that we would list our software on Amazon or similar websites. The way we sell software today is on our own websites where we host the files and manage the payments. Like I said previously, Stripe exists allowing any developer to start accepting payment cards in under an hour.

30% for my business is unacceptable, we turn over a lot of money without needing the App Store and for sure we tried it and saw almost no movement because Apple doesn't advertise for you, you have to pay extra for that. So with the 30% we saved on non-existent sales we put it into advertisements that actually moved software from our own home page. Fees we incurred were about 3% of cost on average including customer acquisition costs.

Simply not true, I've lived it. The app store is so full of apps it's overwhelming and users rarely look past the top 10 lists or the first suggested app from the search bar. You need a huge marketing push to get anywhere and when Apple is already taking 30% of each sale it makes it really difficult to have money to spend on marketing. Much better to push users to your own website, we saw results doing that while we saw nothing from App Store.

Sorry that your marketing efforts didn't work out. My own experience is the opposite. Hundreds of thousands in sales through the App Store thanks to successful marketing plus the huge quantity of traffic the store offers. Far more than any single software seller is seeing on their own site alone.

Have you not been to an Apple Store? They still have software on the shelves. It is still a thing.

You may be selling just fine without the App Store. That's awesome. Go you. Keep it up. What I've seen in my own experience is that while we sell several million in software a year through out own site, the addition of the App Store means ADDITIONAL sales. More on top of what we'd see selling on our own site alone. Seems you're willing to turn away that additional revenue stream and that's fine. But many of us are seeing huge benefits from diversifying out distribution and finding additional sources of sales.

You're looking at the cut Apple takes from a funny angle. With modern software distribution it costs you nothing to give away a copy of your software. If you sell 1 copy or 100 or even 10,000 copies, the cost to you as a developer (producing that product) is the same (yes there is some additional support cost and a few others but the price is practically the same. Because of this, if you can sell additional copies through the App Store which you wouldn't have on your own site, even that reduced profit is all profit. If you get $70 instead of $100 per copy you sell through them, that's still $70 more than you would have had without them and it costs you nothing additional to sell that extra copy of your software.

It sounds like you're happy with your sales and making a stand to not use the App Store is important to you. That's great. There are however thousands of other developers out there happy to give Apple a small cut because it means sales they never would have had without being listed in the App Store and it makes them far more money.
Score: 2 Votes (Like | Disagree)

Quu
I'm not surprised it's not on the Mac app store. Apples 30% cut on desktop software is really quite a lot for developers (of which I am one). You can take payments using Stripe easily and they will only take about 1.4%-2.9% of a sale so if you have an hour free to implement Stripe on your website you can keep the other 27.1%-28.5% that Apple would take.

Their 30% works on the iPhone because there's no way to sideload apps but on the Mac it doesn't work that way.
Score: 2 Votes (Like | Disagree)
Read All Comments

Tuesday October 20, 2020 2:34 am PDT by Tim Hardwick
As we wait for the iPhone 12 review embargo to lift later today, more pictures are circulating of the devices in real-world lighting conditions, providing a better look at the different colors available. Leaker DuanRui has shared images on Twitter of the iPhone 12 in white, black, blue, green, and (PRODUCT)RED. The black and white colors are similar to the iPhone 11 colors, but the other...
Read Full Article • 200 comments

Tuesday October 20, 2020 10:06 am PDT by Juli Clover
Apple today released iOS and iPadOS 14.1, the first major updates to the iOS and iPadOS 14 operating system updates that were released in September. iOS and iPadOS 14.1 come a week after Apple released the golden master versions of the updates to developers. The iOS 14.1 update can be downloaded for free and it is available on all eligible devices over-the-air in the Settings app. To access...
Read Full Article • 183 comments

Tuesday October 20, 2020 11:56 am PDT by Joe Rossignol
iPhone 12 Pro reviews hit the web today, and one of the more interesting tidbits came from TechCrunch's Matthew Panzarino, who revealed that the Gold version of the device apparently has a more fingerprint resistant coating applied to the stainless steel frame. From his review:Most of the iPhone 12 Pro finishes still use a physical vapor deposition process for edge coating. But the new gold...
Read Full Article • 116 comments

Tuesday October 20, 2020 8:48 pm PDT by Joe Rossignol
Apple's new iPhone 12 Pro Max is equipped with a 3,687 mAh battery, which is around 7% less capacity than the 3,969 mAh battery in the iPhone 11 Pro Max, according to a regulatory filing published by TENAA, the Chinese equivalent of the FCC. The regulatory filing, spotted by MacRumors, also lists the iPhone 12 Pro Max with 6GB of RAM as seen in benchmark results last week. Apple has filed ...
Read Full Article • 177 comments

Wednesday October 21, 2020 3:17 am PDT by Hartley Charlton
After the first reviews for the iPhone 12 and iPhone 12 Pro emerged yesterday, a new report by Tom's Guide reveals the extent of battery life reductions when using 5G. The report outlines a test wherein the iPhone surfs the web continuously at 150 nits of screen brightness, launching a new site every 30 seconds until the battery drains. Interestingly, the test was run on an iPhone 12 and...
Read Full Article • 221 comments

Tuesday October 20, 2020 1:53 am PDT by Tim Hardwick
Apple's rumored AirTags Bluetooth tracking devices could launch imminently and will be available in two size options, based on new tweets from cryptic-but-reliable leaker L0vetodream. In typical enigmatic style, the leaker first tweeted this morning that a "big one" and a "small one" are "coming soon," but withheld what they were referring to. However that was followed an hour later with the ...
Read Full Article • 125 comments