Classic first person shooter Shadow Warrior is available as a free download for Mac over on GOG and Steam this morning. The 1997 PC game garnered fans for its wacky humor, multi-function weaponry, and destructible environment, being based on the Build platform that powered Duke Nukem 3D. 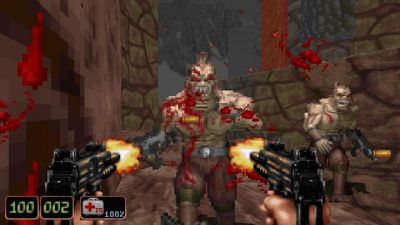 Shadow Warrior was an ambitious game for its time, containing many features not seen until later first-person shooter games, such as drivable vehicles, climbable ladders, and multiple firing modes for various weapons. The game was rebuilt in 2014 with OS X support and published by 3D Realms.

The full game (including two expansion packs) is being offered on Steam as a free download, but picking it up from GOG also gets gamers the original soundtrack in MP3 and FLAC format as an additional freebie. The remastered "Redux" version of the game is also available on Steam for $0.99 as part of a 2017 Summer Sale.

Looks like it might be a 32 bit app. Sierra will be the last macOS to support it.
Unless your like the a majority of users like me that are still running snow leopard on our everyday desktops.

You mean High Sierra, so another ~1 1/2 years to run on the latest macOS release.

And I think these metrics contradict heavily your claim that the majority of users are still running Snow Leopard: https://www.netmarketshare.com/operating-system-market-share.aspx?qprid=10&qpcustomd=0
Score: 7 Votes (Like | Disagree)

Pakaku
Can't wait for my iMac Pro to ship so I can play this old gem
Score: 6 Votes (Like | Disagree)

JosephAW
Looks like it might be a 32 bit app. Sierra will be the last macOS to support it.
Unless your like the a majority of users like me that are still running snow leopard on our everyday desktops.
Score: 5 Votes (Like | Disagree)

Looks like it might be a 32 bit app. Sierra will be the last macOS to support it.

As already pointed out, the upcoming High Sierra will be the last macOS to support it directly, not Sierra. In addition, given the vintage of the game and the hardware it was written for, I suspect it may run reasonably well under Snow Leopard (or other version of OS X) running in a VM on a newer Mac.
Score: 3 Votes (Like | Disagree)

Porco
Free games and lossless soundtracks are a good thing. Nice. :) Also, I see GOG offers a money back guarantee for 30 days, so if you miss your 0.00 of money you can ask for it back, which is also nice. :D

You mean High Sierra, so another ~1 1/2 years to run on the latest macOS release.

And I think these metrics contradict heavily your claim that the majority of users are still running Snow Leopard: https://www.netmarketshare.com/operating-system-market-share.aspx?qprid=10&qpcustomd=0

Yeah, I keep seeing some (to some degree understandable given Apple's history of abandoning legacy support at the drop of a hat) confusion over when 32-bit apps are going to stop working. It's worth repeating the point that High Sierra is supposedly the last version of Mac OS that WILL run 32-bit apps, not the first that won't. Maybe Mac OS 10.14 (or MacOS v11? Whichever... ) should be called 'Bye Sierra' :p

On those metrics, maybe it's my bias (I stuck with Snow Leopard for as long as I could and ended up skipping Lion altogether) but I find it interesting that that 10.6 is still above 10.8, 10.7 and 10.5 yet I think I'd be right (?) that sales of macs have gone up over that time period, meaning a lot of those users on 10.6 could update to later versions but chose no to. Still not huge percentage wise of course, either way, but still a fair number of actual users. Thanks for posting that, interesting.

For those that haven't had the displeasure of using Windows 8, it's basically like if Apple put out a new version of macOS where they got rid of Finder, the Dock, and Spotlight, and it required you to hold a spork (included) whenever you used it.

I hated Windows 8 when I tried it, although you could get back to a semi-normal desktop experience once you figure it out a bit. That said, isn't Windows 10 utterly privacy invading compared to all earlier versions (security vulnerabilities notwithstanding)? Or did they roll that back a bit since the launch? (I lost interest so didn't follow what happened... *confesses ignorance on subject*).
Score: 2 Votes (Like | Disagree)
Read All Comments