Though we're only four months away from the presumed launch of the "iPhone 8," we haven't seen any part leaks for the much-rumored OLED device nor have we seen parts for the two standard LCD iPhones that are said to accompany it.

With a lack of part leaks, we're relying on dummy units, design drawings, and design renders to give us an idea of what to expect from the device, and there's been no shortage of those leaks, many of which are somewhat confusing due to the fact that Apple tested several iPhone 8 prototypes.

This week, the first hands-on video featuring an alleged iPhone 8 dummy model surfaced. We already saw the dummy model in question in photographs back in April, but the video provides a better look at the device, and perhaps a better picture of what the iPhone 8 might look like if accurate.


This particular dummy device, said to be a CNC model, aligns with design drawings and rumors pointing towards an edge-to-edge display with a glass body encased in a shiny stainless steel frame. There is no Home button and no visible Touch ID sensor, suggesting it is built into the display, which would be in line with many rumors.

It features a dual-lens rear camera in a vertical orientation and it lacks an Apple logo, so it's not entirely clear if this is representative of the final design Apple settled on, but it does match up with a lot of the rumors we've heard. Alleged iPhone 8 design drawings and schematics that resemble this dummy suggest the iPhone will be thicker than the current iPhone 7 and iPhone 7 Plus.

The dummy device in the video above represents one set of design drawings we've seen, but there's also a second set of design images that have circulated featuring an iPhone with an aluminum body and a rear Touch ID button underneath the Apple logo. The device with a rear Touch ID button is said to be one of the prototypes Apple tested as a fallback should an under-display Touch ID solution not pan out.

Rumors and leaks seem to be coalescing around the first iPhone 8 design without a rear Touch ID sensor, suggesting the images with the back Touch ID button are based on an outdated design that was perhaps scrapped. That it appears unlikely this design will be used in the iPhone 8 hasn't stopped one China-based company from creating an iPhone 8 clone based on the schematics and design drawings that have been circulating.

Leaker Benjamin Geskin this morning shared images of what he says is an iPhone 8 clone that was designed based on an early iPhone 8 prototype model. It features a front display with slim bezels, a vertical camera, an aluminum body in multiple colors, and a rear Touch ID sensor. 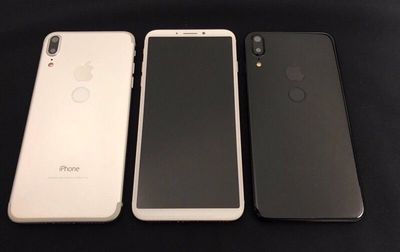 As a clone, this is not representative of what the real iPhone 8 will look like, but it provides an interesting glimpse at prototype design and what an iPhone with a rear Touch ID sensor might resemble.

With multiple prototypes in testing, the actual design of the iPhone 8 will remain unconfirmed and up in the air until we start to see legitimate part leaks. In past years, part leaks have started earlier than May, and their absence may suggest that Apple still has not settled on a finalized design.

For a complete overview of the iPhone 8 rumors and a better picture of what we expect to see included in the overhauled device, make sure to check out our iPhone 8 roundup. It goes into much greater detail on the different design prototypes and it includes information on all of the internal features we expect, like advanced biometrics (facial or iris recognition), an A11 processor, wireless charging, a new front-facing camera system, and more.

terrywfoster
I sure hope that home button is NOT on the back.
Score: 32 Votes (Like | Disagree)

Whatever these leaks suggest, I just can't imagine Apple release this kind of device.
Touch ID on the back, home button gone...
I know many on here have lost faith in Apple, but I haven't. There are almost no sensible decisions that lead to such a design choice, but exactly these design choices are (some say were) at Apple's core. Hence I would love to just put this off as false for now.
One can hope... 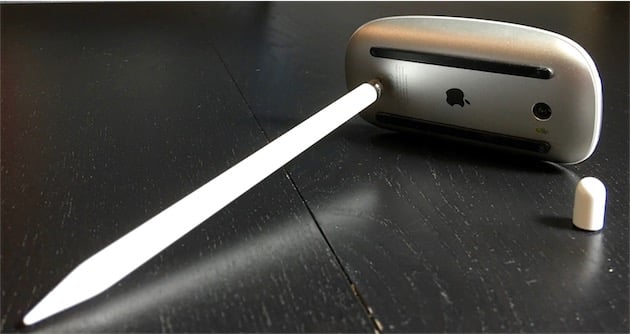 rpe33
Some of you commenters are so ridiculous. Someone could leak a picture of a rock and call it the iPhone 8 and you'd all be like "It's so ugly! Apple has lost its touch! I'm not buying that!".
Score: 10 Votes (Like | Disagree)
Read All Comments