The new 2017 10.5-inch and 12.9-inch iPad Pro models that were introduced at last week's Worldwide Developers Conference are today available for purchase at Apple retail stores around the world. 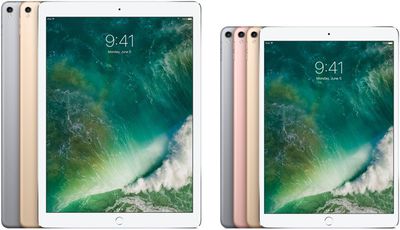 Apple began accepting iPad Pro orders just after the WWDC keynote event, and the first iPad Pro models began shipping out over the weekend with most offering June 13 delivery dates.

Why did you buy it in the first place?
Score: 18 Votes (Like | Disagree)

zorinlynx
Why in the heck would they make the bezels smaller? The existing iPad bezels were already kind of hard to hold onto without covering the screen. Now it's going to be even harder.

I don't get the hate on bezels, especially in this forum. You need to be able to HOLD your devices; it's nice to be able to without your fingers covering the screen.

this 2nd gen 12.9 feels a lot lighter than the first gen did.

No, just your wallet. :D
Score: 9 Votes (Like | Disagree)
Read All Comments

Thursday December 1, 2022 4:37 pm PST by Juli Clover
With the launch of iOS 16.1, Apple rolled out a Emergency SOS via Satellite, which is designed to allow iPhone 14 owners to contact emergency services using satellite connectivity when no cellular or WiFi connection is available. The feature was put to the test in Alaska today, when a man became stranded in a rural area. In the early hours of the morning on December 1, Alaska State Troopers ...
Read Full Article • 236 comments

Friday December 2, 2022 10:54 am PST by Juli Clover
Google is continuing on with its attempt to convince Apple to adopt the RCS messaging standard, publishing a new "it's time for RCS" blog post. Promoted heavily by Google, RCS or Rich Communication Services is a messaging standard that is designed to replace the current SMS messaging standard. It provides support for higher resolution photos and videos, audio messages, and bigger file sizes, ...
Read Full Article • 594 comments

Monday December 5, 2022 11:44 am PST by Juli Clover
Due to production issues at Apple supplier factories in China, the iPhone 14 Pro and iPhone 14 Pro Max are backordered and basically out of stock at every store. If you were planning to gift or receive an iPhone 14 Pro model for the holidays and didn't already get one, you're basically out of luck because they're gone until late December. Subscribe to the MacRumors YouTube channel for more ...
Read Full Article • 103 comments