iFixit has posted its teardowns of Apple's new 12-inch MacBook and 13-inch MacBook Pro with Touch Bar, revealing that apart from the advertised performance boosts the models are largely unchanged from the previous models.

The only really notable change comes in the 12-inch MacBook, which Apple has updated with a second-generation butterfly-mechanism keyboard, as found in the 2016 MacBook Pros, according to iFixit. As some readers will remember, Apple's 12-inch notebook debuted in 2015 with a redesigned keyboard that some users criticized for a lack of travel that they felt made it harder to type on. 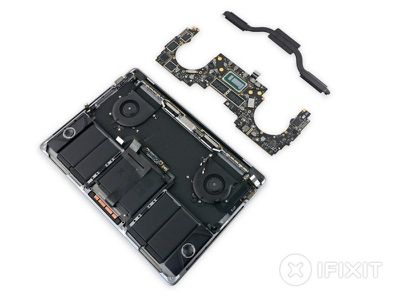 Apple used a tweaked version of the same keyboard design in its 2016 MacBook Pros, which most users felt was an improvement with "better give", and the same keyboard now adorns the latest MacBook. According to iFixit:

The keyboard trigger looks like a more classic switch this go-around. The plastic butterfly mechanism appears to have thinned out to accommodate the new switch form factor. The keystroke and travel feel about the same to us, so perhaps the real change is reinforcement for repeated use.

Overall, iFixit gave both of Apple's new notebooks a 1 out of 10 on the repairability scale, owing to their soldered-down RAM, processor, and flash storage, along with glued-down batteries. The scores are in contrast to Apple's new 4K 21.5-inch iMac, which was awarded a surprising 3 out of 10 for repairability, thanks to Apple's use of replaceable memory modules and socketed Kaby Lake CPUs.

jimbobb24
It's sad the biggest interface items on the Pro kind of suck now. The keyboard is not great and the trackpad apparently is too big and gets in the way. Thinner is an obsession that is hurting lots of products.
Score: 13 Votes (Like | Disagree)

Mick-Mac
I have a late 2016 15" MacBook Pro and I just hate the keyboard. Aside from the tiny amount of travel, every key depression makes a loud tap noise. Typing an email while in a meeting in a conference room is highly distracting to everybody because of the noise. I would much rather have a laptop that is 1mm thicker and a better feeling, quieter keyboard (and likely also longer battery capacity)
Score: 11 Votes (Like | Disagree)

It just got major updates less than a year ago
damn you guys ask for a lot
Score: 9 Votes (Like | Disagree)

drinkingtea
Seven months later and I'm still unable to type on my MacBook's keyboard. Unbelievable. I've already started considering replacing it with a Surface. What is the use of having a laptop if you can't type on it?
Score: 4 Votes (Like | Disagree)

Marx55
Apple should use standard ports and components, not soldered inside. And why is the very same make and model of RAM purchased from Apple Store two to three times more expensive than in retailers like Amazon?
Score: 4 Votes (Like | Disagree)
Read All Comments