New MacBook Pro Has Better Keyboard Than 12-Inch MacBook, But It's Expensive and Lacking Ports 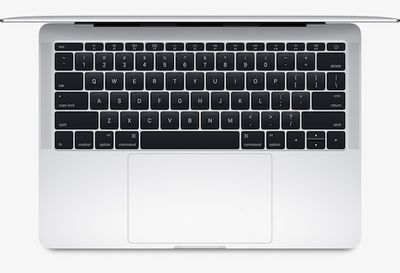 Brian Heater of TechCrunch said the keyboard "feels more natural" and that individual keys have "better give":

The new technology certainly marks a step in the right direction. The process feels more natural, and the keys have better give. I still prefer the tactile feel of older keyboards, but a lot of that may just have to do with familiarity. After all, the device was only announced yesterday.

Jim Dalrymple at The Loop echoed that sentiment, noting there is "a little more travel distance when you press down on a key":

It seems to me that there is a little more travel distance when you press down on a key with the newer keyboard. I actually like that a bit better. After using both, the MacBook keys didn’t have enough travel. This one feels much better to me.

Stuart Miles of Pocket-lint said the new keyboard is sandwiched between "louder, clearer, and cleaner" speakers with bass-heavier sound:

The keyboard is now sandwiched between two speakers that run the height of the keyboard and deliver a louder, clearer, cleaner noise which is considerably more rounded and bassy than the previous outings. That's achievable because Apple has changed the speaker technology moving away from bouncing the sound off the display, instead placing the direct firing speakers either side of the keyboard.

They’re good for casual listening and maybe an episode or two of a TV show. Anything longer than that, I would go with a pair of headphones or Bluetooth speaker. Also things start to deteriorate when things hit top volume.

Dan Ackerman at CNET said the new non-Touch Bar MacBook Pro might be "the new default MacBook for most people," although its price is disappointing:

Both screens are 2560×1600 and 227 PPI, the same resolution and density as the old design, though the screens are brighter and support the DCI-P3 color gamut, which is increasingly becoming the norm for Apple’s devices.

Cunningham added that the new MacBook Pro scales to 1,440×900 pixels out of the box, which makes it look like it has a higher screen resolution:

Let's start with the design: Holy moly, is this thing small. I noticed it right away, just because my normal work laptop is a MacBook Air, which means I'm used to something much larger than this. The difference is especially obvious if you stack one machine on top of the other. Though both have 13.3-inch screens, the new MacBook Pro has a much smaller footprint — it's shorter and less wide. Truly, trimming down that humongous bezel from the Air makes a world of difference.

One aspect of the new MacBook Pro often criticized is its lack of ports. The non-Touch Bar model has only two Thunderbolt 3 ports, which carry power, USB, DisplayPort, HDMI, and VGA for video out over a single port. As with the 12-inch MacBook, customers will have to purchase adapters to connect certain devices and accessories.

Steve Kovach at Business Insider said the need for "a lot of dongles" is "the most frustrating thing" about the new MacBook Pro:

If you want to use older accessories or even charge your iPhone, you're going to need to buy a separate adapter or brand-new cable. That's going to be super annoying for a lot of people as the industry continues to shift to USB-C. For example, the cable that lets you charge your iPhone in the MacBook Pro will cost you $25. Yikes.

macsrcool1234
The stupidity/absurdity of the ports is the only reason I didn't order one.

Keep the headphone jack out of the iPhone but leave it in the Macbook, continue to use the garbage known as Lightning in iPhone rather than USB-C....do they just roll dice and arrive at these nonsensical decisions?
Score: 45 Votes (Like | Disagree)

soupcan
Expensive and with a lack of useful ports.

Glad that reviewers also call it that, because that's what it really boils down to.
Score: 41 Votes (Like | Disagree)

LillieDesigns
Been on a mac for 13+ years now and have owned every iPhone since the original. I was due for an iPhone 7 and a new notebook this year and have been mind-numbingly underwhelmed by both keynotes so far this season.

I know it's been beat to death, but the biggest issue for me is the lack of ports and need for dongles on both devices. It's impractical and I can't help but feel I just happened to land in the beginning stages of a shift in the industry and everything I buy now will be looked back on as a mediocre hybrid of the past and future in terms of tech.

Still not sold on Windows or Android devices though. Kind of at a stand still and will most likely wait it out with my 128 gb base level 2013 MBA and my iPhone 6...which blows.

I wanted to spend my money Apple, just not that much for so little.
Score: 40 Votes (Like | Disagree)

I don't understand the fuss about the pricing. It seems to be mostly in line with the previous (and earlier) generations?

I don't care about paying more, I just want more in return, not LESS.
Score: 35 Votes (Like | Disagree)

New MacBook Pro Has Better Keyboard Than 12-Inch MacBook, But It's Expensive and Lacking Ports