iFixit has published a teardown of the new 4K 21.5-inch iMac, which reveals that – surprisingly – Apple's smallest all-in-one desktop machine has both removable RAM and a Kaby Lake processor that's not soldered onto the logic board. 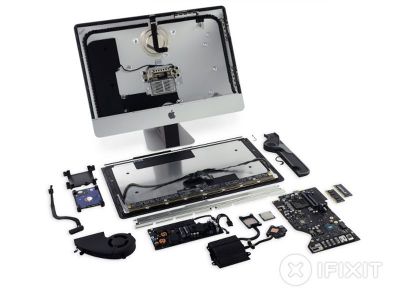 After slicing through the adhesive that secures the 4K display to the iMac's housing and removing the power supply, hard drive, and fan, iFixit discovered that the memory modules aren't soldered onto the logic board like previous models, but instead sit in two removable SO-DIMM slots.

Similarly, after detaching the heatsink and removing the warranty voiding stickers on the backside of the logic board, iFixit found that the Intel SR32W Core i5-7400 Kaby Lake processor sits in a standard LGA 1151 CPU socket, making it possible to replace or upgrade the CPU without a reflow station.

As iFixit notes, an upgradeable iMac is a big shift in direction from Apple. The last 21.5-inch iMac with expandable memory was the 2013 model, while the last to include a modular CPU came in 2012. iFixit speculates that the change to a socketed processor may be because Intel's desktop class Kaby Lake line-up currently lacks any permanently mountable chips, but it's conceivable Apple could have requested one if it so chose.

It's important to note that Apple officially considers these parts non-user-replaceable, which is easy to see given the relative difficulty accessing them – compare the work involved in accessing the 21.5-inch iMac's RAM slots, with the external memory hatch found in the 27-inch iMacs, for example. That said, the fact that replacing these components is practically possible will come as music to the ears of tinkerers armed with the right tools and instructions.

Other minor changes of note discovered in the teardown include a single microphone below the iMac's LG-manufactured display (where previously there were dual mics), a replaceable CMOS battery, and an upgradeable 3.5-inch SATA hard drive, but no SSD connector.

Check out the full teardown on the iFixit website.

tencentcat
"Sure enough, the good people at MR will find something to complain about this, too."

djcerla
Sure enough, the good people at MR will find something to complain about this, too.
Score: 27 Votes (Like | Disagree)

Stella
Wow. Apple have withheld the solder and glue!!

NachoGrande
That HD is just embarrassing. It was the biggest bottleneck with my imac 7 years ago. I guess it still is..
Score: 19 Votes (Like | Disagree)

That HD is just embarrassing. It was the biggest bottleneck with my make 7 years ago. I guess it still is..

It is absolutely pathetic that in 2017 such supposedly premium high-end devices are not SSD-only. As you said, embarrasing. :(

Also - from Apple spec page I gather that iMacs still have disgustingly outdated (720p?) facetime cameras. Only the $5K iMac Pro will have 1080p HD facetime camera. Wow, 1080p, so amazing, how did they pull it off? /s
Score: 17 Votes (Like | Disagree)

Sure enough, the good people at MR will find something to complain about this, too.

There's always going to be complainers, and not exclusive to Apple products. But that doesn't negate the value of legitimate criticisms. That is progresses' fuel. If we all just praised every thing "just because" companies would have no incentive to improve product.

So yes, it's great these models don't have soldered RAM and possibly could even take a CPU upgrade. But still would be better if Apple reintroduced the concept of relativity easy user upgrades for these items.

And honestly 5400rpm is absurd on a "premium" computer. 7200 drives are just as cool these days. Apple is just trying to save pennies and nickel and dime.
Score: 16 Votes (Like | Disagree)
Read All Comments