Ahead of the launch of iOS 11, there were several signs suggesting 32-bit apps would no longer be supported in the new operating system, which has been confirmed with the release of the first iOS 11 beta.

When attempting to open a 32-bit app when running iOS 11, the app refuses to launch, offering up a message that says the app needs to be updated to work with iOS 11. 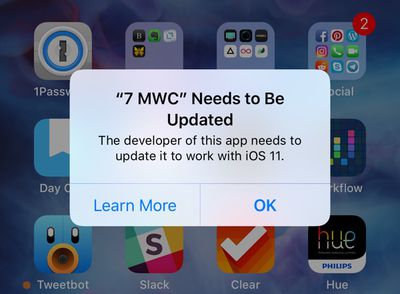 32-bit apps are also not available when searching in the new version of the App Store, and previously downloaded 32-bit apps can't be installed through the Purchased tab.

Over the course of the last several months, warnings about 32-bit apps have gotten increasingly dire. With the launch of iOS 10.1 in October of 2016, Apple started warning customers that older apps "may slow down your iPhone."

In January of 2017, the first iOS 10.3 beta featured an even more serious message when launching a 32-bit app, which specifically read "This app will not work with future versions of iOS."

Given the warnings, it should come as no surprise that Apple has eliminated support for 32-bit apps, but it does render many older apps that have worked for years without updates unusable. There are likely many users who continue to use 32-bit apps regularly who will be surprised to find that those apps no longer work when iOS 11 rolls out to the public.

Apple started supporting 64-bit apps when the iPhone 5s launched in September of 2013. As of June 2015, all apps and app updates must use the 64-bit architecture, so apps that are still 32-bit have not been updated in at least two years.

Current iOS 10 users can check to see if there are any 32-bit apps on their iOS devices in the Settings app. Go to General --> About --> Applications to get to the "App Compatibility" section that lists any outdated apps.

ILikeAllOS
Well, I guess I will finally have to say goodbye to the good old AppShopper app. :(
Score: 16 Votes (Like | Disagree)

This sucks donkey balls. The apps work just fine and yes, a lot of them are paid.

Sadly, nowhere was it stated that you paid for perpetual support.
Score: 15 Votes (Like | Disagree)

What about my money? Purchased a few 32-bit apps a month ago.

Email the devs and tell them to get off their butts.
Score: 11 Votes (Like | Disagree)

RudySnow
I had a couple of games that I enjoyed playing that were 32-bit. However, I had the foresight to download them a few months ago to an iPad 2 so that I can keep playing them in perpetuity... or as long as the battery holds out! :)
Score: 10 Votes (Like | Disagree)

usarioclave
This sucks donkey balls. The apps work just fine and yes, a lot of them are paid.
Score: 10 Votes (Like | Disagree)
Read All Comments