Although Apple Park has opened to a small group of employees, the site's buildings and landscaping remain in ongoing construction around the campus. In a new interview with Backchannel, Apple Park's senior arborist, David Muffly, has provided insight into the work it's taken to choose, locate, and plant 9,000 trees at Apple Park, as well as detailed his first interactions with former Apple CEO Steve Jobs.

Jobs discovered Muffly's work during walks he would take around a large satellite dish on Stanford’s campus, admiring as he went hundreds of native oak trees along the path. He made Apple headhunters find the arborist responsible for planting the trees, leading to Muffly, who at the time was working a job pruning lemon trees in Menlo Park. 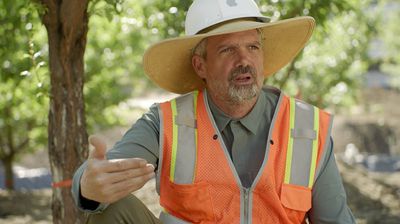 David Muffly
The two were said to have hit it off "within 20 minutes of meeting," where Jobs described what would see a grand opening seven years later as Apple Park. Muffly and Jobs met in 2010, and in 2011 Muffly was granted the official title of "senior arborist" at Apple.


Within 20 minutes of meeting, it was clear that the arborist and the technologist were on the same wavelength about trees. Jobs told Muffly that he wanted to create a microcosm of old Silicon Valley, a landscape reenactment of the days when the cradle of digital disruption had more fruit trees than engineers.

In one sense, the building would be an ecological preservation project; in another sense, it’d be a roman a clef written in soil, bark, and blossom. Muffly, who had been sensitive to the native growth of the region for years, got it immediately. “That’s what I’ve been doing — planting fruit trees, oak trees,” he said.

Eventually, Muffly was shown early design drawings of Apple Park and the arborist realized the full scope of the project. While thousands of workers would be focusing on the construction of the campus' architecture, he and a small team of landscaping experts would face the full brunt of responsibility for what Jobs considered one of the most important parts of the site: the trees.

And he began to get a sense of the massiveness of the project — hundreds of architects and untold numbers of contractors would wind up working on the building, an edifice that might well become as iconic to California as the pyramids are to Egypt. But the campus itself was meant to be a statement on nature. And that would be his job.

Yeah, there’s that building, he thought. But there’s a lot more trees than buildings. There’s going to be, like, 5,000 people making that building. And it’s going to be just me and my friends doing the trees. “So right off the bat, I was like, Whoooaa. This is as real as it gets.”

Muffly eventually began working with Philadelphia-based landscape architecture firm The Olin Studio to make Jobs' vision a reality at Apple Park. The team agreed that Apple Park should be stocked with trees and greenery "that might thrive in drought conditions brought about by climate change," as well as diversifying the variety of trees on the campus with native trees as the backbone of the ecosystem and then less common genetics dispersed throughout Apple Park.

As Muffly worked with Jobs in the early planning of Apple's new campus, before the late CEO's passing in 2011, he was impressed with Jobs' knowledge of trees. "He had a better sense than most arborists," Muffly said, and at his official pitch to the Cupertino City Council, Jobs promised an increase from the 3,700 trees on the site to 6,000 before the project's completion.

To fill the revised goal of 9,000 trees on the site, Muffly eventually scoured Christmas tree farms across California.

...When Muffly began his work, he realized that nearly all the (non-indigenous) existing trees would have to go. “It was all junk trees and parking lots here,” he says. “So it was a long process. Over the next year or so. I surveyed the trees and picked out about a hundred of them that I felt were worth moving. And we had to stretch to get a hundred out of the [roughly 4,000] existing trees.”

All of the landscaping work for Apple Park eventually created shortages for other companies attempting to buy trees in the area, with a report by the San Francisco Chronicle earlier this year stating that, "Buying trees is a surprisingly cutthroat business."

In a behind-the-scenes look at Apple Park last month, one architect reminisced about Jobs' particular fondness for trees: to the late CEO, "trees were the most beautiful bits of art," said architect Stefan Behling. "He used to say, 'The most amazing thing about trees is it doesn't actually matter how rich you are: You can never buy a really old, beautiful tree.'"

You can read the full Backchannel interview with David Muffly right here.

orbital~debris
Thanks for posting this, MacRumors!

Sure enough, some will pour scorn on this type of article or make lame jokes. But it's fascinating.

I find following Apple is a wonderful thing as it leads to so many unexpected avenues of learning new things.
Score: 31 Votes (Like | Disagree)

"The most amazing thing about trees is it doesn't actually matter how rich you are: You can never buy a really old, beautiful tree."
Score: 16 Votes (Like | Disagree)

Applebot1
I like these kind of stories and brings home how much I miss Steve:(
Score: 11 Votes (Like | Disagree)

Thanks for posting this, MacRumors!

Sure enough, some will pour scorn on this type of article or make lame jokes. But it's fascinating.

I find following Apple is a wonderful thing as it leads to so many unexpected avenues of learning new things.

And, preemptively, to these kinds of people:
[IN_AS_MOCKING_A_TONE_AS_POSSIBLE]Tim cook should focus on gimme gimme gimme instead of his stupid trees which don't matter anyway.[/IN_AS_MOCKING_A_TONE_AS_POSSIBLE]
(as if a Fortune 500 CEO is incapable of doing more than one thing) just zip it and crawl away. There's more to life than pizza delivery and megapixels.
Score: 10 Votes (Like | Disagree)

GFLPraxis
9K trees? When can I get that kind of resolution in my back yard??
Score: 7 Votes (Like | Disagree)

groovyd
this is going to be a really beautiful campus... steve would certainly be proud.
Score: 7 Votes (Like | Disagree)
Read All Comments