Apple is purchasing so many trees for its upcoming Apple Park campus that it's becoming challenging for other companies to source trees, according to a report from the San Francisco Chronicle.

"Buying trees is a surprisingly cutthroat business," reads the Chronicle in a piece about a rooftop City Park that's being built above the upcoming Transbay Transit Center in San Francisco. Adam Greenspan and Patrick Trollip, who are sourcing trees for that project, say Apple has made it hard to track down trees across California and Oregon. 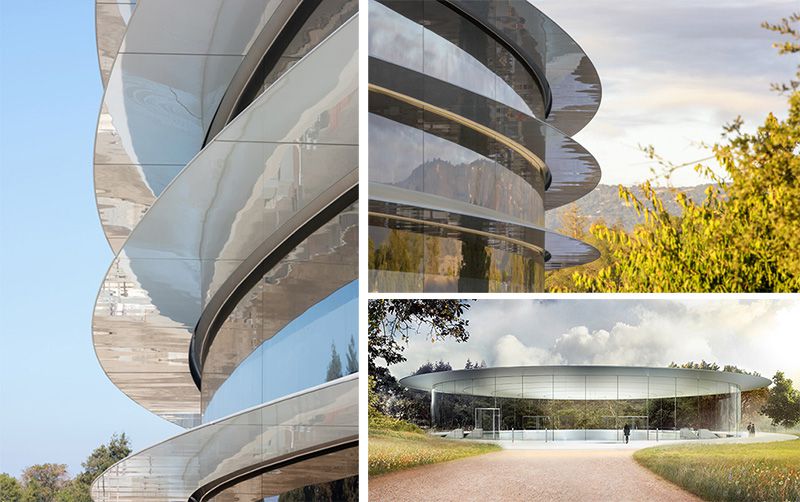 And it's been especially challenging to locate desirable specimens because Apple has been buying up 3,000 trees for its new Cupertino headquarters. When Greenspan and Trollip found a tree they fancied they would "tag it" with a locking yellow tag, so that nobody else -- like Apple -- could get it. Eventually all the tagged trees were moved to a nursery in Sunol, where the transbay project team leased 4 acres.

Apple Park, Apple's second campus with the famous spaceship-shaped main building, will be completely covered in greenery. Landscaping at the site started late last year, and Apple has said it will plant more than 9,000 native and drought-resistant trees, including fruit trees.

In a separate report on Apple Park, The Economist highlighted the parking situation at the campus. For the 14,000 workers that Apple plans to have on site, Apple has built nearly 11,000 parking spaces, many of them located in underground lots beneath the main building and in two garages at the south of the campus.

Employees will begin moving into Apple Park in April, but Apple has said it will take more than six months to transition thousands of employees to the site. Smaller building construction and landscaping has not been finished and will continue into the summer, even after the campus sees its grand opening.

macduke
Trees are great. All I can see out my back windows are thousands of trees, and any time I work from home I sit facing out the window so I can look at the trees and it re-energizes me. My old office had a few of these beautiful trees out my window that turned bright fire orange and yellow in the autumn and had pretty blooms in the spring. When we moved offices our team was put in the basement and it really took a big toll on me—both productivity wise, and emotionally by not getting any daylight or fresh air. So I can see why Apple is so keen to surround their beautiful windowed campus with tons of trees. It's going to be great for their employees, and look good too.
Rating: 17 Votes

Apple would contract out the work to a landscape maintenance company, one that is skilled in maintaining fruit trees as well as the normal plants used in corporate campus landscaping.

It may be the same existing service that currently maintains their various building complexes in Silicon Valley.

It's not like Phil Schiller has been driving the lawn mower at 1 Infinite Loop for the past decade.

And any decent professional gardener should be able to understand and execute the basic care of common fruit trees. They're not super exotic species, homeowners grow these things in their backyards around here.

Remember, most of what is now called Silicon Valley used to be fruit tree orchards.

Of course, Apple could simply call the City of Saratoga and ask, "who maintains your heritage orchard?"

They don't need to hire rocket scientists for this.
Rating: 14 Votes

Miss the point much? The trees are not exotic, they are fruit trees. Growing fruit trees is farming. Whether the maintenance and harvesting is contracted out or not (which many farmer and ranch owners do), it is still agriculture.

Speaking of around here, around here we are under serious pest and disease threat. The county comes in every few months now and sprays all of our backyard fruit trees. We have only a few of them. Apple will be growing thousands of them. Get it yet?

Sorry to hear the fruit trees in Palookaville are struggling.

Miss the point much?

People farmed fruit trees in Santa Clara Valley for over a hundred years before high tech companies started paving over the orchards and building offices. This was the main industry in the area for over a century in terms of square acreage and labor.

There are still orchards here and there are still people who know how to maintain them. Like I said, the City of Saratoga has a sizable well-maintained heritage fruit tree orchard.

Heck, your typical professional residential gardener will know something about caring for fruit trees because many of his/her clients will have some in their backyards. Heck, most people in the landscape maintenance business came from farming families and it is highly likely that in any sizable landscaping team that someone in the group grew up on a farm that had some of those trees.

Go look at 1 Infinite Loop on a map and find the cross street Mariani Avenue. That street is named after a local fruit tree farmer; the descendants of that family still farm fruit trees in Morgan Hill. And there are a LOT of other streets in the valley that are named after farmers.

You make it sound like this is some sort of newfangled risky venture that has never been attempted in Santa Clara Valley and it can only be handled by some horticulture Ph.D. Well, you are completely wrong. Steve put the fruit trees in the plans as a tribute to the area's history.

Steve would have known that, he grew up in Santa Clara Valley before it was called Silicon Valley and when there was still a fair amount of acreage that had fruit trees.


I know, right??
I've been wracking my brain trying to figure out how they're going to keep their urinals scrubbed. That hasn't been one of Apple's main businesses so far either; so it's a TOTAL mystery how it happens! Do all the software engineers, industrial designers, marketing guys, and whatnot just draw straws every Monday & see who is on Landscaping Detail & who is on Toilet Scrubbing Detail?
I mean, if only there was some kind of a precedent for this!!
But.... as you know: lawyer's office's toilets are scrubbed by the senior partners, the president mows the White House lawn, etc.
So your question was definitely well thought out & not in the least bit absurd & reminiscent of like the thought process of a 12 year old that found his big brother's chronic stash.....

(I jest of course; that is the most RIDICULOUS "musing" one could possibly post!)
Rating: 10 Votes


I'm sure Apple will have people to maintain the trees.

They're not gonna take their silicon engineers and software developers and make them arborists. :)
Rating: 7 Votes

Farmers farmed fruit trees. That means Apple is now in farming. I don't "make it sound" like anything else that you haven't completely imagined. I personally always find it easier and more productive to listen to what other people actually say rather than to try to imagine what they actually meant. Your mileage obviously varies.

Apple is now the owner of fruit trees. Not a big deal. Lots of locals have fruit trees on their property that are maintained by others, namely gardeners. You don't need to be a horticulturist/farmer/whatever to own a fruit tree.

You still really don't get it, do you? But please keep commenting, I'm sure Apple employees who read this forum are laughing their asses off.

This is probably the most hilarious forum topic thread I have read in MONTHS.

I'm going to sleep now, looking forward to reading what scintillating responses you have to this tomorrow. Keep up the good work! We're counting on you now!!!

Fruit trees have special maintenance needs. They are subject to pest infestations that need to be controlled, the fruit has to be harvested on a schedule. The people who know how to do that kind of stuff are called farmers. Whether they contract it out or handle it in house, Apple is getting into the farming business.


Right?!
EXACTLY!!! You get it!
You know, like how - it takes specific cleansers, used in the proper manner to keep toilets spotless. The people that know how to do that kind of stuff are called Janitors. Whether or not Apple contracts out their toilet cleaning or handle it in house; Apple is getting into the janitorial business!

note:
PLEASE don't stop defending your silly stance!
I could do this for however long; and it's fairly mirthful!
Rating: 5 Votes
[ Read All Comments ]