Microsoft today introduced the new Surface Pro, choosing that name over Surface Pro 5, at a media event in Shanghai, China. 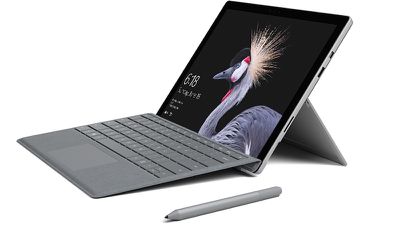 Microsoft said the new Surface Pro delivers up to 13.5 hours of battery life on a single charge, a 50 percent increase over the Surface Pro 4 and 35 percent more battery life than the iPad Pro's advertised 10 hours.

Surface Pro m3 and i5 models feature a new fanless cooling system, while the i7 model still has a fan with "improved hybrid cooling."


The new Surface Pro has a refined design with cleaner lines and curved edges, a "visually softer" camera, and an improved hinge with a 165º range of motion allows it to be placed in Studio Mode like its Surface Studio desktop.

The new Surface Pro continues to have a 12.3-inch display with 267 pixels per inch, compared to 264 PPI for both the 9.7-inch and 12.9-inch iPad Pro. Microsoft says its custom PixelSense technology means that colors on the new Surface Pro will be "more vibrant, precise, and impactful than ever before."

Other tech specs include up to a 1TB SSD, up to 16GB RAM, up to Intel Iris Plus 640 graphics, a USB 3.0 port, a microSD card reader, Mini DisplayPort, and a 3.5mm headphone jack. The device runs Windows 10 Pro.


There's also new Signature Type Covers, now designed with Alcantara fabric for a "soft, velvety" feel. Microsoft pitches typing on the keyboards as "easier, more, comfortable, more accurate, better sounding, and easier to do without looking" than the 12-inch MacBook and iPad Pro.

profets
An Intel Core i7 which requires a fan to keep cool is only 1.7x faster than a 2 year old A9X ARM CPU? Doesn't sound too impressive.
Score: 67 Votes (Like | Disagree)

Does it still run Windows? Yeah?

I would gladly take Windows over a supersized version of my iPhone 7 Plus......Since the iPad was rumored I always hope it would have full Mac OS
Score: 44 Votes (Like | Disagree)

SSD-GUY
Lol at the people on here belittling how the Surface is faster than the iPad pro because the iPad runs an ARM processor.

I don't care what the iPad runs, they cost roughly the same yet the Surface can do more, much much more than the iPad Pro.

The ARM processor may be amazing, but let's face it, as Jamesrick posted before, it's crippled by the limitations of running iOS.
Score: 42 Votes (Like | Disagree)

BrettArchibald
I'm not tempted by this for the sole reason that it has Windows on it.
But what Microsoft is doing right is not just slapping a phone OS onto a tablet and expecting us to fall for it.
Are you paying attention Apple?
Score: 40 Votes (Like | Disagree)
Read All Comments