92 percent of iPhone owners that are "somewhat likely" or "extremely likely" to upgrade their smartphone in the next 12 months plan to purchase another iPhone, according to investment banking firm Morgan Stanley. 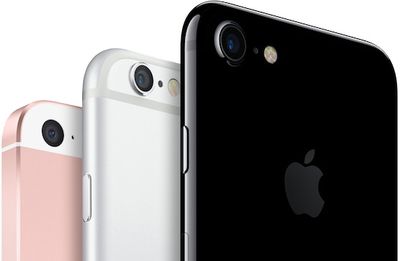 Apple's loyalty rate, up from 86 percent a year ago, is based on an April 2017 survey of 1,000 smartphone owners aged 18 and above in the United States. It's the highest iPhone retention rate recorded by Morgan Stanley since an all-time high of 93 percent set in September 2015, when the iPhone 6s launched.

It's our belief that a maturing installed base that is accustomed to iOS and increased press around potential new technologies in the upcoming iPhone drove the strong year-over-year increase. Importantly, the rise in Apple's loyalty rates comes after Samsung, Apple's biggest competitor in the United States, introduced the Galaxy S8, which was available for pre-order starting March 30th. Apple's loyalty rate of 92% dwarfs that of all other vendors, with Samsung garnering a 77% retention rate, followed by LG (59%), Motorola (56%), and Nokia (42%).

Despite reports suggesting "iPhone 8" mass production could be delayed by months, Huberty said Morgan Stanley's Greater China Technology Research colleagues have "not yet seen delays in the supply chain" and still expect new iPhone production to start on time for most components, including the OLED display.

"Nevertheless, we remain conservative in our initial expectations for iPhone supply," the research note cautioned.

Morgan Stanley raised its price target for Apple's stock to $177 today, up from $161, given growing confidence in its 2018 fiscal year "supercycle" estimates, along with a greater mix of recurring, high-margin services revenue, and a larger cash balance with potential for repatriation in the United States.

Michaelgtrusa
When you have the best eco system, people stay.
Score: 35 Votes (Like | Disagree)

I wonder what loyalty-rate the Mac has since October...

All those people screaming "I'm movin' to Windows!"

Soccertess
Tim likes to flaunt this loyalty, and has no problem using it to increases dongle sales because knows people will follow.

Except there is a tipping point. Microsoft experienced that. At some point people got so fed up, they left and haven't returned, until now. Tim is the best thing to happen for Microsoft and Android.
Score: 12 Votes (Like | Disagree)

many iPhone owners have already switched to one of the better devices like Galaxy S8, Pixel, LG G6, etc

Hardly better. Much slower, for example, with worse battery life and ecosystem. Camera? Maybe better on some kind of photos, but leagues behind in video and zoom capabilities.

The iPhone 8 will make those devices look very dated.
Score: 10 Votes (Like | Disagree)

v0lume4
Those numbers are incredible.

It also brings up a (in my opinion) disappointing reality -- remember cell phone shopping back in the day? Each new phone you purchased was totally new. That's what made new phones so exciting. You might go with LG for one phone cycle, then you might go with Samsung the next. And then Blackberry. It always kept things fun and refreshing. These days, most folks stay with one operating system and (in Apple's case) one vendor, year after year. Phone upgrades are simply slightly better iterations of the previous phone.

That said, phones are better than ever, and they can do more than ever. We are much better off than we used to be with the phone market of the 2000's. So take what I said with a grain of salt. But it's just a thought.
Score: 10 Votes (Like | Disagree)
Read All Comments