The card can be used to make purchases like any other, except rather than keying in a PIN number, card holders can choose to place their finger over the square sensor to approve the transaction.

Alternatively, users can take a two-tier authentication approach and use both their PIN and fingerprint to approve the purchase. However, users of the card won't have the convenience or security that comes with registering their print with their smartphone. 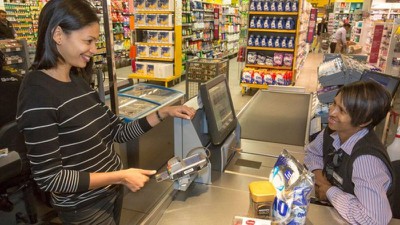 With Apple Pay, fingerprint data is encrypted and protected with a key available only to the Secure Enclave on the user's iPhone. The Secure Enclave is walled off from the rest of the hardware and the OS, meaning iOS and other apps never have access to user fingerprint data, it's never stored on Apple servers, and never backed up to iCloud or anywhere else.

The biometric credit card has no such protections. Instead, the user must register their print with the bank or financial institution that issued the card, and while the fingerprint is encrypted on the card itself, it's still unclear what security and privacy measures are in place to deal with the registration process.

Despite those concerns, Mastercard's chief of safety and security, Ajay Bhalla, said that the fingerprint technology was "not something that can be taken or replicated", and that the biometric card would help "to deliver additional convenience and security".

MasterCard plans to roll out the cards in Europe and the Asia Pacific region soon, following successful tests in South Africa through Barclays subsidiary Absa and supermarket Pick n Pay.

JohnApples
I find it a bit funny that people are willing to trust banks with extremely personal information such as home address, social security number, and those very specific "recovery questions". Oh and let's not forget entire life savings. Yet when it comes to a fingerprint, that's where we draw the line.

I mean, I get it. I probably wouldn't use this either. But if you're uncomfortable sharing your fingerprint with your financial institution, maybe you shouldn't be sharing every other detail about your life with them, too.

EDIT: alright folks I get it! You can change the other stuff but you can't change your fingerprint! Please stop quoting me!
Score: 8 Votes (Like | Disagree)

Jyby
I dont want this.
Score: 6 Votes (Like | Disagree)

maflynn
On paper it seems like a good idea, but in practice, I'm not so sure.

What about readers that pull a card in and don't give you the option to hold the sensor? My credit cards are scratched and marked up from being in my wallet, I can see the sensor being just as scuffed up. I'd rather not be fumbling at a register trying to buy something and because I have scratches on the my credit card I cannot use that card.

Also I'm not about to give my bank my fingerprint.
Score: 5 Votes (Like | Disagree)

BrettArchibald
Oh, so you still have to put the card INTO the card reader...?
Meh. Pass.
It's just more convenient to wave my phone in the general vicinity of the card reader instead.
It's also a lot more convenient to pull my phone out of my pocket and then stick it back afterwards (2 steps) than take my wallet out my pocket, take my card out of my wallet, put the card in the reader, take the card out the reader, put my card back into my wallet and then put my wallet back in my pocket (6 steps).
Score: 2 Votes (Like | Disagree)

How does this deliver additional convenience above Apple Pay or Google Wallet?

Because there is a significant amount of the population that doesn't use a smart phone capable of using Apple Pay or Google wallet.
And especially elderly people who may have difficulty recalling PIN numbers etc.

So yes, while I personally use Apple Pay daily and acknowledge that it has been a game changer for me, I do think there is potential for MasterCard's new tech.
Score: 2 Votes (Like | Disagree)

Nimrad
So how does this work? I'm guessing some sort of power would be needed? Does it get the power from the terminal when inserted maybe? And is my fingerprint stored on the card or in the cloud?
Score: 2 Votes (Like | Disagree)
Read All Comments