Apple's iOS has dropped to its lowest share of the smartphone market in urban China since July 2014, according to new data collected and shared by Kantar Worldpanel. Today's report specifically details smartphone shares around the world for the three months ending in February 2017. In total, devices running iOS dropped 8.9 percentage points from the same year-ago quarter, receding from 22.1 percent of the China market to 13.2 percent.

Apple rival Android remains the dominant force in China at 86.4 percent of the smartphone market in the country, growing 9.3 percentage points year-over-year. Although the iPhone 7 and iPhone 7 Plus remained the top selling devices in China, Apple has trouble competing with local vendors -- like Oppo and Vivo -- who produce cheaper smartphones at a massive rate that are far easier to obtain by the Chinese consumer. 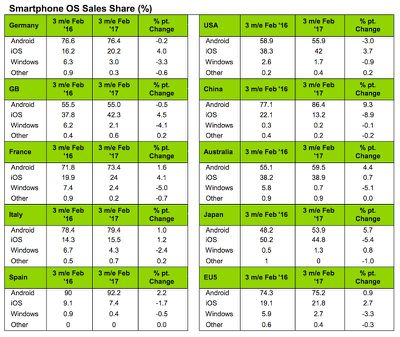 Not much has changed for either iOS or Android in the United States since Kantar's last report, although the latter OS has continued to see a decline in market share throughout December, January, and February. Android has dropped three percentage points when compared to the same year-ago quarter, now accounting for 55.9 percent of the U.S. smartphone market, while iOS has grown by 3.7 percentage points year-over-year to take 42 percent of the market in the U.S.

As in China, iPhone 7 and iPhone 7 Plus remained the top-selling smartphones in the U.S., which the devices have been since Kantar's report on the three months ending November 2016. Kantar's analysts cited hope that Google Pixel "might soften the drop in Android sales" that happen annually around every iPhone launch -- and which dropped even more dramatically last year because of the Note7 -- but the Pixel doesn't appear to have picked up the slack for the Android market in the U.S.

Kantar's report also looked forward to the rest of 2017, admitting that the three months ending in February is a "challenging time" to report on due to its awkward middle ground proximity between the holiday season last year, and upcoming announcements at events like WWDC in the summer.

“The February period is always a challenging time to report on consumer behaviour and plans, since many people put purchases on hold following the holidays, waiting for the latest phone announcements from Mobile World Congress,” Guenveur said. “The much-anticipated March 29 announcement of the Samsung Galaxy S8, combined with the somewhat unexpected launch of the (PRODUCT) RED iPhone 7 and iPhone 7 Plus, and the capacity upgrade to iPhone SE a week before that, may mean that the remainder of Q1 and Q2 could yield some interesting, even unpredictable, shifts in the market.”

Apple CEO Tim Cook has remained vocal in his optimism about the company's presence -- and future -- in China, mentioning in an earnings call last year that, "We may not have the wind at our backs that we once did, but it's more stable than the common view of it." More recently, Cook went into even more detail about Apple's China plans, stating that, "We're not just someone who's here to access the market," and that the company intends to bolster its presence in the country through providing jobs and improving people's standard of living.

dannyyankou
Not surprising, China has some very cheap android phones. It's hard to compete when you're trying to sell the most expensive option.
Score: 16 Votes (Like | Disagree)

Not surprising, China has some very cheap android phones. It's hard to compete when you're trying to sell the most expensive option.

Especially when a lot of these cheap Android phones are a lot better
Score: 15 Votes (Like | Disagree)

I think average income has something to do with it too, it's a lot lower than the USA

I suspect the "elitist" image of the iPhone has worn off, there are so many in the wild these days , nothing special about it anymore. Apple did themselves no favours with the 6 design running three years, for many it's about bling....and when people cannot tell the difference from a 6 to 7, people will jump Android to show off. Just a theory . And why the Samsung S8 is getting good feedback
Score: 13 Votes (Like | Disagree)

JPack
Chinese consumers are getting tired of iPhones when domestic products from Huawei and Xiaomi have much better marketing and retail presence. For example, the Huawei Mate 9 has a bigger display than iPhone 7 Plus and significantly better battery life and costs about the same.

Chinese consumers are getting richer every year. It's not about the money. German luxury cars sales in China have outstripped those in the U.S. for the past several years. iPhone simply no longer offers the same wow factor as before to demanding Chinese consumers.
Score: 13 Votes (Like | Disagree)

Not surprising, China has some very cheap android phones. It's hard to compete when you're trying to sell the most expensive option.

When Tim Cook and company get on stage and keep bragging about China and how well they're doing in China, it is pretty embarrassing to see Apple losing steam rather than growing like they try to sell when on stage.
[doublepost=1492095902][/doublepost]

I think average income has something to do with it too, it's a lot lower than the USA

But then you have countries like Germany or France where income is high and yet Android is still much more prevalent.
Score: 10 Votes (Like | Disagree)
Read All Comments