The information that was shared in that interview has been well-covered in recent days, but TechCrunch today published the entire interview transcript, which is well worth reading for those who want a complete uninterrupted look at what Apple had to say on the topic of the Mac Pro and its professional customers. 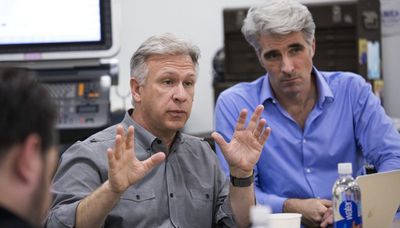 Image via TechCrunch
During the interview, Schiller and Federighi apologized to professional users for the delays with the Mac Pro and unveiled work on a new modular Mac Pro that will address issues with the current machine, including upgradeability and support for single high-end GPUs.

The new Mac Pro, which will also come with a professional display, isn't going to come in 2017, so in the meantime, Apple has significantly dropped the prices on its older Mac Pro machines, all of which still contain hardware from 2013.

Other tidbits shared in the interview include Apple's plans for the iMac, what went wrong with the design of the current Mac Pro, news on the Mac mini, Apple's thoughts on the MacBook Pro Touch Bar, the importance of pro users, and more.

Federighi has some of the best hair in the tech industry.
Score: 23 Votes (Like | Disagree)

Federighi has some of the best hair in the tech industry.

Federighi Is just awesome in general. He seems like a really respectable individual with a lot of knowledge in the tech world, has a great attitude and is surprisingly hilarious on stage.
Score: 23 Votes (Like | Disagree)

Federighi Is just awesome in general. He seems like a really respectable individual with a lot of knowledge in the tech world, has a great attitude and is surprisingly hilarious on stage.

Apple Knowledge Navigator
This is what they need to do more - be transparent with power users.
Score: 12 Votes (Like | Disagree)

Asarien
It's time for all these old people who don't understand where the industry is now, to be replaced with young blood who are hungry and foolish.
Score: 10 Votes (Like | Disagree)

tod
All of our complaining actually accomplished something?!
Score: 9 Votes (Like | Disagree)
Read All Comments