Malware attacks on Macs were up 744 percent in 2016, according to the latest Threat Report shared by McAfee Labs [PDF]. Mac users don't need to be overly alarmed, though, because much of that huge jump can be attributed to adware bundling. macOS malware samples jumped up 245 percent in the fourth quarter of 2016 alone just from adware.

Adware, while irritating, is less alarming than true malware attacks that can hijack a machine or render it unusable. 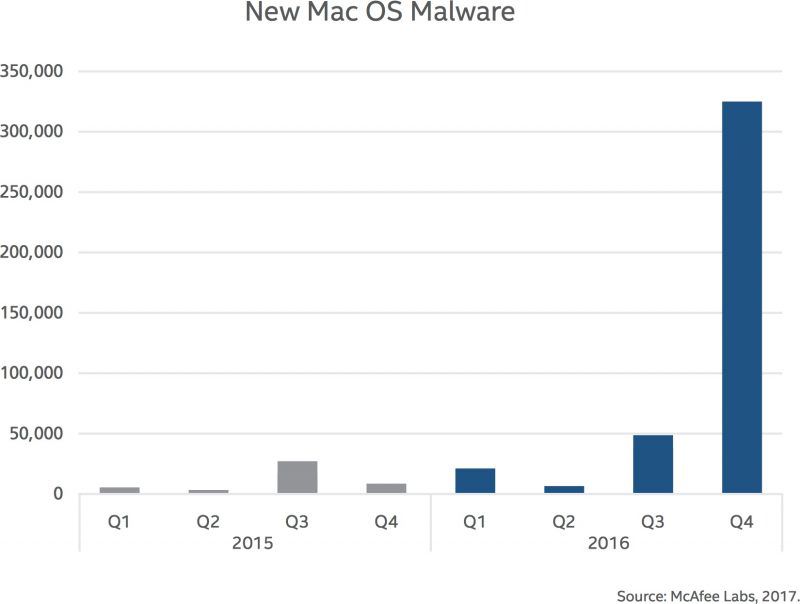 McAfee says it discovered 460,000 malware samples on Mac machines, a huge increase over 2015 numbers, but still just a small portion of overall malware out in the wild. According to McAfee, there were more than 630 million total instances of malware last year. 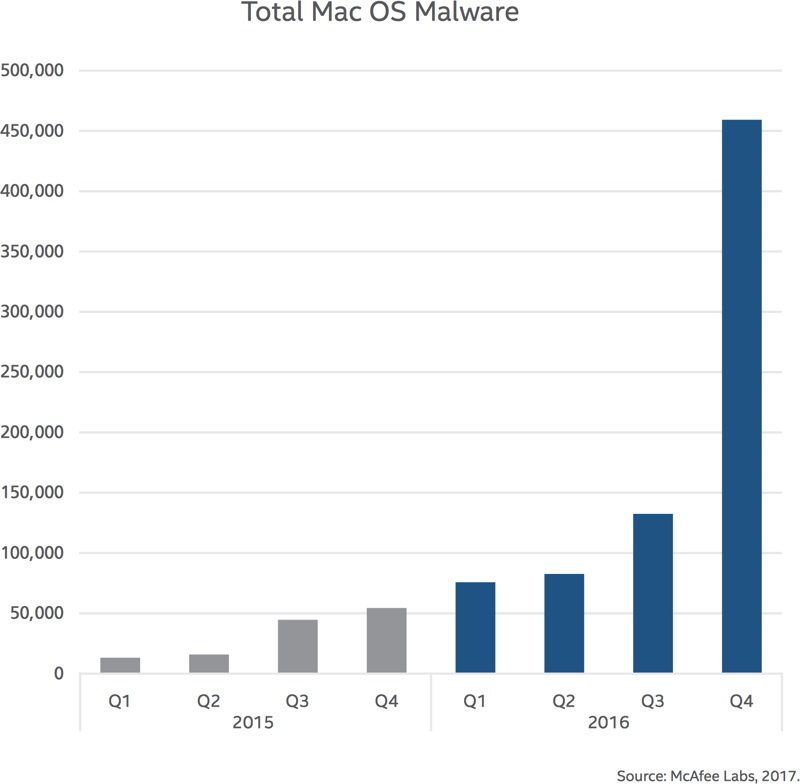 While most of the surge in Mac malware was adware, we've still heard about some alarming Mac-based attacks over the course of the last year, including ransomware distributed via trusted BitTorrent client Transmission, Backdoor.MAC.Eleanor, Xagent, which could steal passwords and iPhone backups, and more.

Mac users who want to avoid malware and adware should only download software from trusted developers and directly from the Mac App Store, which should keep Mac machines relatively safe.

willmtaylor
I'm glad we can trust an unbiased source that doesn't have any skin in he game, like McAfee. :D
Rating: 12 Votes

BasicGreatGuy
From the article: "Mac users who want to avoid malware and adware should only download software from trusted developers and directly from the Mac App Store, which should keep Mac machines relatively safe."

I completely agree. I also think it is important to use content blockers, as well as being mindful of where you go on the internet.
Rating: 11 Votes

OldSchoolMacGuy
Settle down. Doesn't take much to have increases like that when you have such low levels to start with.

If you have 1 case and now you have 100, you've had a 9900% increase. It's still not a lot considering how many Mac users there are, but it makes for great attention grabbing stats to get people to pay attention to your website article or get them to buy your security product.
Rating: 11 Votes

If you read beyond the headline, the article clearly explains the situation and that there Is no need to panic, also has supportive data.


I read beyond the headline. In fact I looked at the linked document from McAfee. Neither explain what "adware" is, how it gets onto a Mac, how to detect if we have it, how we can rid ourselves of it, or why we should not be concerned about it one way or another. Otherwise, a very complete article.

So if the intended message was that we should not panic, then that message was far from clearly conveyed either by McAfee or MR.
Rating: 7 Votes

star_nerdy
The problem is that malware works. And you don't even need to create something malicious.

I worked for Apple support and people would call in frequently with their browser saying call support and they would tell me they had this happen before and it cost them $300 to fix but they couldn't afford that again.

The issue was adware infected the mac and when they reopened safari they would be redirected to an infected URL. The solution is simple, but safari into safe mode by holding shift as you open safari and then clear history and maybe go over their library files for known malware.

People throw money at these people because they don't know how to tell the difference between spam and phishing attacks or how to clear cache and history.
Rating: 6 Votes

6 months ago, I had my first ever malware incident on my Mac. I even use an anti-virus and don't load random apps.

It turned out an official app (downloaded from App Store) that must have gone rogue or had a backdoor problem.

It was definitely a wake-up call.

To protect and to serve :D

I went back to VLC a few years ago and forgot all about M Player. It must have been an easy target.

(I should probably write a review).

After the attack, I went through my entire Mac went a fine toothcomb.

It's interesting that so many people are so dismissive in this thread - that kind of pride usually comes before a fall. It's a computer, and all computers are susceptible to malware of some nature.
Rating: 3 Votes

Amazing Iceman
What I have seen last year is a dramatic increase in RansomWare, FakeFlash, Phishing email, etc. Most of this Malware does come from an Ad Banner. Their purpose is to confuse and get the user to enter his password so the malware can install itself.

In many cases, an antivirus may not protect the user against these threats, so being an educated user is the best protection.
Rating: 3 Votes
[ Read All Comments ]