What You Need to Know About Mac Malware 'Backdoor.MAC.Eleanor' 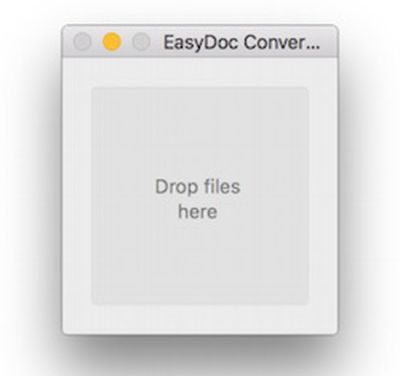 "EasyDoc Converter.app" is a third-party Mac app that poses as a drag-and-drop file converter. The app has the following fake description:

EasyDoc Converter is a fast and simple file converter for OS X. Instantly convert your FreeOffice (.fof) and SimpleStats (.sst) docs to Microsoft Office (.docx) by dropping your file onto the app. EasyDoc Converter is great for employees and students looking for a simple tool for quickly convert files to the popular Microsoft format. EasyDoc Converter lets you get to work quickly by using a simple, clean, drag-and-drop interface. The converted document will be saved in the same directory of the original file.

EasyDoc Converter was previously available on software download website MacUpdate, but the app was removed by July 5. It may remain available for download elsewhere online. The app was never available through the Mac App Store.

The app was created with Platypus, a developer tool used for native Mac apps from shell, Perl, Python or Ruby scripts.

Backdoor.MAC.Eleanor infects Macs with EasyDoc Converter installed. The app installs a malicious script that is registered to system startup and allows an attacker to anonymously access the infected Mac.

How does Backdoor.MAC.Eleanor put my Mac at risk?

Attackers then have the ability to access and modify files, execute shell commands, capture images and videos from iSight or FaceTime webcams, and more through a web-based control panel:

What is a Tor hidden service?

Tor is free software that allows for anonymous communication over a computer network, known as onion routing. The software essentially re-routes network traffic through a network of computers so that it cannot be traced back to its source IP address, allowing users to browse the internet without being identified.

Tor hidden services are websites or servers configured to accept inbound connections only when they are routed through the anonymity network. A hidden service is accessed through its "onion" address, such as XXXpaceinbeg3yci.onion, which the attacker can connect to to gain remote control of the infected Mac.

Which Macs are affected?

Identify your Mac model by clicking on the Apple logo in the top-left macOS menu bar and selecting "About This Mac."

How do I protect myself against Backdoor.MAC.Eleanor?

The most important and obvious preventative measure is to avoid downloading "EasyDoc Converter.app" from any source. Installing unfamiliar apps from unidentified developers is almost always a security risk.

Mac users can also download a trusted anti-malware app such as BlockBlock, which continually monitors common persistence locations and displays an alert whenever a persistent component is added to the system.

Users that already installed EasyDoc Converter can download anti-malware software Malwarebytes, which has already been updated to detect and remove Backdoor.MAC.Eleanor.

How will Apple deal with this malware?

And not even a virus
Score: 14 Votes (Like | Disagree)

Sooooo... don't download stuff that isn't from the App Store. Check and check.

Lucky you if your computer usage gets by using only App Store applications.

Then again, eventually I decided to use the MAS more as a means to find applications and then get them from the company's own website.
Often you can snatch them up cheaper (for example EDU discounts) and the applications are more capable.

RDeckard
"The most important and obvious preventative measure is to avoid downloading "EasyDoc Converter.app" from any source."

Let's see how much press this gets vs. "HummingBad" malware that's infected millions of Android handsets.
Score: 11 Votes (Like | Disagree)

MacUpdate being used to distribute malware yet again....People need to stick with the App Store. I think at this point we should assume anything downloaded from MacUpdate probably has malware of some sort.

The fact that MacUpdate send you their updater App NOT the file you asked for killed MacUpdate for me.
ANY system that does this is a malware site and can no longer be trusted.

If you are forced to use MacUpdate, ALWAY click the link to download from the developers site so MacUpdate can not try to install their software.
Score: 8 Votes (Like | Disagree)

dwaltwhit
But will it really convert my documents?
Score: 6 Votes (Like | Disagree)
Read All Comments