Production on the 2017 iPhone is moving along, with Apple recently having placed orders for 70 million OLED panels, reports Nikkei. Samsung, as we already know, will be Apple's sole OLED supplier, and will provide Apple with the panels.

Demand for the 2017 iPhone, which is expected to feature a major design overhaul with an edge-to-edge display, glass body, and a premium price tag, is expected to be high as it typically is in a year when a new look is unveiled. Apple and Samsung are gearing up to meet demand with the large panel order. 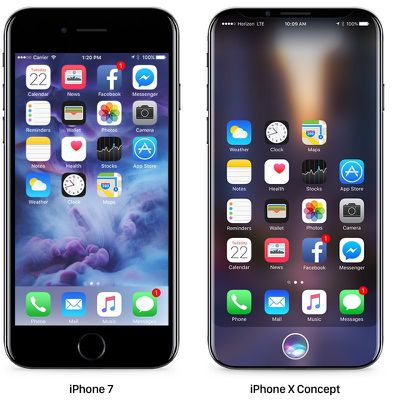 "Apple has ordered 70 million units of OLED panels from Samsung this year, while Samsung is preparing to churn out as many as 95 million for Apple in 2017, in case demand exceeds expectations," Hsieh said.

There have already been rumors suggesting the OLED iPhone will be in short supply when it launches in September, with the majority of the stock unavailable until later in the year, and Hsieh also believes that could be the case. "It is also possible that some of these 70 million handsets will not be shipped to customers this year and be carried over to next year depending on demand," he said.

Nikkei's industry source, in addition to covering panel orders, also shared some details on the upcoming device that echoes many rumors we've heard in the past.

The site believes we will see a premium OLED iPhone with a 5.2-inch screen and no home button, which will be sold alongside standard 4.7 and 5.5-inch devices with LCD screens and home buttons. All three iPhones will include wireless charging functionality (lately said to be inductive) and waterproofing, while at least one model, presumably the OLED iPhone, will include a 3D sensor that supports facial recognition.

Other features rumored for the iPhone 8 not mentioned in Nikkei's report include camera improvements, a faster and more efficient A11 processor, Touch ID built into the display, True Tone ambient light adjustment, and perhaps augmented reality functionality enabled through the camera.

sunapple
Thanks Samsung for developing, manufacturing and beta testing our OLED panels. We will still say Apples implementation is way better though.
Score: 20 Votes (Like | Disagree)

Highly doubt it will look better than the galaxy 8

Really? Those ugly rounded corners and a fingerprint sensor on the back? I'd hope Apple could do better.
Score: 16 Votes (Like | Disagree)

kdarling
It's ironic to think back to the news in February 2013, when:

"At a Goldman Sachs investor conference today, the Apple CEO dismissed the idea that [OLED] display technology is something Apple should adopt."

Cook, asked if Apple would consider creating devices with larger displays, said that size and specifications are things companies focus on when they can’t “create an amazing experience.”
Score: 10 Votes (Like | Disagree)

I'd prefer if Apple didn't give Samsung any business.

Apple should have purchased SHARP.

Yeah it sucks for Apple zealots that Samsung are still major leaders in component manufacturing. Amongst other markets that Apple don't even operate in.

For the rest of us who don't care where technology advancement comes from as long as it's advancing then this news is inconsequential.

Sharp might be happy they didn't get bought too, considering the recent news with Imagination and what happened with GT.
Score: 10 Votes (Like | Disagree)

Thursday September 29, 2022 12:38 pm PDT by Juli Clover
Tony Blevins, Apple's vice president of procurement, is set to depart the company after he made a crude comment about his profession in a recent TikTok video, reports Bloomberg. Blevins was in a video by TikTok creator Daniel Mac, who was doing a series on the jobs of people he spotted with expensive cars. After seeing Blevins in an expensive Mercedes-Benz SLR McLaren, Mac asked Blevins what ...
Read Full Article • 652 comments