New 9.7-Inch iPad and Red iPhone 7 and 7 Plus Now Available to Order

Apple has just begun accepting orders for the new 9.7-inch iPad and (PRODUCT)RED iPhone 7 and 7 Plus on its online store in the United States and dozens of other countries and regions around the world. (PRODUCT)RED iPhones are also available for in-store pickup at select Apple Stores starting today. 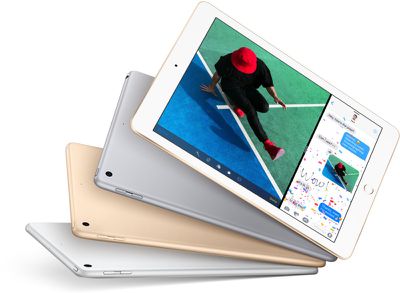 The new 9.7-inch iPad is equipped with a faster Apple A9 chip and brighter Retina display compared to the iPad Air 2, which has been discontinued. It is also somewhat thicker and heavier than the iPad Air 2 since it lacks a fully laminated display with anti-reflective coating in order to keep costs down.

The new 9.7-inch iPad is now available to order on Apple's website in dozens of countries around the world. The first online orders are estimated for delivery between March 31 and April 5 in the United States.

Apple said the new 9.7-inch iPad will be available to purchase at select Apple Stores, authorized resellers, and carrier stores starting next week in more than 20 countries, such as the United States, Australia, Canada, China, France, Germany, Italy, Japan, Netherlands, Spain, Sweden, Switzerland, and the UK.

Apple's special edition (PRODUCT)RED iPhone 7 and iPhone 7 Plus models are also now available to order on Apple's website in 128GB and 256GB storage capacities for $749/$849 and $869/$969 respectively. Initial orders are slated for delivery on Tuesday, March 28 in the United States.

(PRODUCT)RED iPhones have a vibrant red finish complemented by a silver Apple logo and white front bezels. Apple said the models are in recognition of more than 10 years of partnership between Apple and (RED), which gives customers a way to contribute to the Global Fund in support of HIV/AIDS programs in Africa.

got my order in

I don't know why you bother coming on this website, you appear to be unhappy with everything Apple release/don't release/are rumoured to release.

For me personally, this seems a bargain. If there is a massive increased performance between this and my creaking iPad 3 count me in!
Score: 14 Votes (Like | Disagree)

keysofanxiety
That iPad is fabulous value. It'll definitely last a fair few years with that hardware. Yes there's no laminated display but as another poster pointed out, it means screen repairs will be much easier and cheaper if they're damaged.
Score: 14 Votes (Like | Disagree)

agsystems
Who is ordering anything today? I don't see anything appealing
Score: 8 Votes (Like | Disagree)

I don't know why you bother coming on this website, you appear to be unhappy with everything Apple release/don't release/are rumoured to release.

For me personally, this seems a bargain. If there is a massive increased performance between this and my creaking iPad 3 count me in!

Literally every post he has made is anti-apple. I will never understand people that spend huge amounts of time on a company enthusiasts website just to bash the company. I have never been on any android or windows enthusiasts website to denigrate their products, because I don't care. Never. It just seems so weird to me that people spend so much of their time doing this. Oh well, to each his own.
Score: 7 Votes (Like | Disagree)
Read All Comments