Philips today announced that its connected smart bulb lighting system, Philips Hue, is getting a new addition in the form of the E14 candle light bulb. Customers will be able to buy the new bulb in both color and white ambience versions in the U.S. later this year, and in Europe in April. The common candle bulb will fit a wide array of household lighting fixtures, and Philips said this means that Hue "can now be used in over 80% of light sockets commonly used in households around the world." 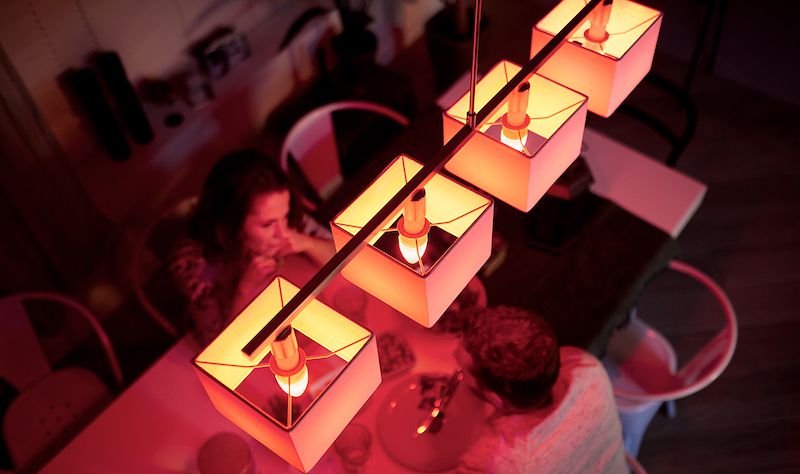 “The candle has been one of the most requested products by Philips Hue customers. We’ve spent time ensuring it is of the highest quality and available in both white ambiance and white and color ambiance. It is an important next step to ensure seamless integration in all rooms, giving you the freedom to personalize lighting throughout your home,” says Sridhar Kumaraswamy, Business Leader Connected Home Systems at Philips Lighting.

Otherwise, the candle light bulb will function the same as previous Hue products, connecting to the company's smartphone app through the Philips Hue Bridge accessory and allowing users to customize lighting colors, set schedules and geo-fences, and turn the lights on and off. According to Philips, candle light bulbs are mainly used in decorative lamps made for the bedroom, and with the white ambience bulb's dimming features users can get a better night's sleep and wake up more energized.

The new accessory is a 40W equivalent bulb with 470 lumens of brightness and will be priced around $40 for a single bulb when it launches in the U.S. later in 2017. Philips didn't mention if it would debut a Hue Starter Kit with the new candle light bulbs, but if it does the package would likely cost the same as current starter kits, which currently run between $70 and $200, depending on the type and amount of bulbs included.

usarioclave
Time to Hue-enable the chandeliers...and now my outdoor lights will match my porch lights. Life is great!
Score: 3 Votes (Like | Disagree)

davidoloan
This is great except for one thing, the price. Chandeliers have so many bulbs. To do one room will cost me $360.

Still, Hue lighting has been one of my favourite tech discoveries, bought on a whim, has turned out to be brilliant.
Score: 3 Votes (Like | Disagree)

Tinmania
I know that Philips wants to sell bulbs, and that is okay. I use HUE and have a LOT of lights under control with it. But for the love of god I wish they would release a HUE switch. My bathroom, and several other places in my home, have 8 or so bulbs that really only need to be on or off. Why should I need to add 8 HUE bulbs, and go through the effort of programming them all, when one single switch would be fine. My garage has fluorescents, so it is completely out of HUE's capabilities. Switches please!


Like many people, MacRumors misquoted the press release, which states that the bulb is a "40W equivalent" (emphasis mine). This is how people compare CFLs, LEDs, and other energy-efficient bulbs to the light output of incandescents people are used to since most people aren't used to comparing lumens, which is the actual measure of light output rather than energy used to produce it (explaining for others, not for you since you obviously know). MR did include the correct 470-lumen output in their summary, though it's worth noting (as Philips also did but MR and most others leave out) that, as with most Hue products, this is the maximum output and only achieved around 4000K (a sort of medium cool white).

Philip's existing 40W equivalent candelabra LEDs range from about 4.0-5.5W, so I suspect this one will be at or just a little bit higher than this. 9to5Mac says 6.5W, though I can't find that in the press release.

That being said, this is a form factor that I suspect many people have been missing. I was, too, until I moved and don't have any of these bulbs anymore. :)
Score: 2 Votes (Like | Disagree)

ignatius345
My big beef with these Hue lights (and a lot of newer LED bulbs) is that they go with these really weak "60W equivalent" brightnesses (usually ~800 lumens) -- that's pretty dim.

We use two Philips non-smart LEDs at 1600 lumens each in our living room lamp. It's nice, bright light, and it's dimmable so you can always scale it back at night.
Score: 2 Votes (Like | Disagree)
Read All Comments