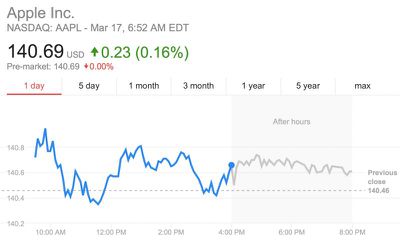 The figures cement Apple's position as the most valuable company by some margin, now with a market value of $738 billion. Google parent company Alphabet remains second largest with a market cap of around $592 billion, followed by Microsoft at just under $500 billion and Berkshire Hathaway at around $430 billion.

Following Apple's first annual revenue decline since 2001, its stock has been steadily rising over the past five months, buoyed by record-breaking earnings results at the end of January. February 14 saw shares reach $136.27 in intraday trading, eclipsing a previous all-time intraday high set in April 2015, while Apple's market value surpassed $700 billion.

Wall Street analysts have claimed for months now that Apple remains one of the world's most under appreciated stocks. Among a large group of Apple analysts, Brian White of Drexel Hamilton, Steven Milunovich of UBS, and former analyst turned venture capitalist Gene Munster have all predicted rises. Apple's relative strength line, which gauges the stock's performance versus the S&P 500 index, is at its highest level since September 2015.

Some projections put Apple's stock price on a continual upward trend over 'iPhone 8' optimism, with several financial analysts raising their price targets for Apple's stock to between $150 and $185, according to research notes obtained by MacRumors.

Is the company now sufficiently wealthy to start paying tax at the same rate as the rest of us or will this obligation continue to be ignored in favour of spewing out ever more gaudy baubles?

The rest of us? Half of America doesn't pay any income tax. Apple's effective tax rate is 25%, much higher than the majority of Americans and that doesn't even account for property tax, payroll tax, inventory tax, or the tax investors and other shareholders pay on quarterly dividends. The idea Apple doesn't pay taxes is another false Internet meme.
Score: 29 Votes (Like | Disagree)

Cineplex
Lesson here: Abandon core product, outsource R&D, use same unoriginal designs year after year, and get involved in transgender bathrooms......stock goes up. Proof that the stock market is a flawed system.
Score: 24 Votes (Like | Disagree)

Jsameds
I love to see Apple doing well but in all honesty I do wish they weren't being rewarded for what has been a disappointing last couple of years, product wise.
Score: 23 Votes (Like | Disagree)

Expectation for future growth and sales must be high. Amazing.

It's only incredible if Apple has anything to back this up with. If not then it will fall faster than you can blink.
Score: 15 Votes (Like | Disagree)

Sack Tim, sack him now, it's tanking, ITS TANKING!!!

You are sarcastic now but there will be hell to pay if Tim doesn't deliver the goods this year -- that is what this run up is based on. I say this both as an Apple fan and shareholder. I hope Tim isn't bluffing this time.
Score: 13 Votes (Like | Disagree)

Lesson here: Abandon core product, outsource R&D, use same unoriginal designs year after year, and get involved in transgender bathrooms......stock goes up. Proof that the stock market is a flawed system.

Stock market is indeed a flawed system, and that's exactly why AAPL is still ridicolously undervalued.
Score: 8 Votes (Like | Disagree)
Read All Comments

Monday November 28, 2022 10:42 am PST by Juli Clover
Apple has cut back on its Twitter advertising, according to Twitter CEO Elon Musk. In a tweet, Musk said that Apple has "mostly stopped" its Twitter ads, asking if Apple hates "free speech." Musk went on to publish a poll asking if Apple should "publish all censorship actions" taken that impact customers and he began retweeting content from companies that Apple has had moderation discussions ...
Read Full Article • 1363 comments