Apple is investigating a melting iPhone 7 Plus that's the subject of a viral video on Twitter, reports Mashable. The owner of the phone, Brianna Olivas, says her phone exploded and started smoking Wednesday morning. Her boyfriend grabbed his phone and started recording the video, which has garnered 21,340 retweets on Twitter.

So my IPhone 7 plus blew up this morning was not even using it, literally no explanation for this pic.twitter.com/sQ8CJt4Y69 — Bree✨ (@briannaolivas_) February 23, 2017

Olivas tells Mashable her phone wouldn't turn on Tuesday, so she took it to the Apple Store. After a couple of tests, employees told her the iPhone was fine and it soon began working normally again. She charged the phone near her as she slept that night, and the next morning her boyfriend moved the phone to the dresser. As he went to the bathroom he saw the phone smoking and heard it squealing. It soon caught fire and he "quickly grabbed it and threw it into the restroom," where it blew up.

Olivas has since turned the phone over to Apple for further testing, with the Cupertino company saying it'll know more within a week. An Apple spokesperson said the company is in touch with Olivas and is "looking into" the matter. 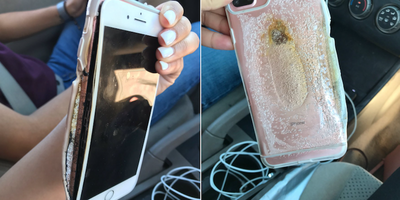 Photos via Brianna Olivas
Exploding smartphones have garnered increased attention since Samsung's Galaxy Note 7 was plagued with widespread reports of exploding devices, prompting an "unprecedented" recall of the popular device. Lithium-ion batteries are more prone to malfunctioning and exploding when manufacturers and suppliers don't take proper care in preparing the batteries for use. For example, Samsung blames the Note 7's battery problems on a flaw that caused two incompatible parts of the battery came together.
187 comments

iphone 7 was their biggest seller yet, lol try reading some real stats. or r u a note 7 fan lol

Uhh..../S stands for sarcasm, which I used after my post. I was being sarcastic. Welcome to the internet.
Score: 41 Votes (Like | Disagree)

Oldfash33
Possible of course, but I call BS
Score: 21 Votes (Like | Disagree)

Pbrutto
5 bucks on Chinese gas station charger....also the cable in the console in the car has a 90 degree bend with what looks like a tear in it....
Score: 15 Votes (Like | Disagree)

Relentless Power
Apple should shut the doors. The iPhone 7 is a flop. /S

It's one phone. Many things could have caused this. No one was injured. Apple is investigating it.
Score: 14 Votes (Like | Disagree)

Sevanw
Just love how the article says the iPhone 7 is "melting." But when the Note 7 had its battery issue and was doing the exact same thing, it was referred to as "exploding." :rolleyes:
Score: 12 Votes (Like | Disagree)

garirry
I don't know all the details, but I have a feeling that it's fake.
Score: 12 Votes (Like | Disagree)
Read All Comments