Apple CEO Tim Cook received an honorary degree from the University of Glasgow in Scotland today as planned. Cook then sat down for a Q&A session with the audience of students, reflecting on topics ranging from his personal beliefs and influences to U.S. President Donald Trump's recent immigration ban. 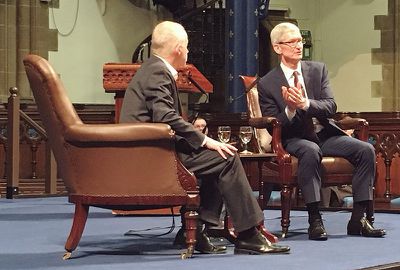 One student asked if he could work at Apple as a tongue-in-cheek question, and Cook noted the company is hiring worldwide and pointed him towards its jobs website. Cook later said "coding should be required in schools," as "kids will never know any other environment other than the digital one."

Cook, responding to a question about Apple's future activism plans, said he does not view Apple or himself as an "activist." Instead, he said Apple simply stands up for things it is deeply knowledgeable or has a strong point of view about.

.@tim_cook is officially an honorary grad! Does this mean we all need to switch to @Apple? 😋 pic.twitter.com/v89lJydDCH — Uni of Glasgow (@UofGlasgow) February 8, 2017

Cook reiterated that he does not support Trump's recent immigration ban, echoing a memo he sent to employees a few weeks ago. Apple was one of several tech companies that sent a letter to Trump opposing the executive order, noting "we are a nation made stronger by immigrants."

Apple was also one of nearly 100 companies, including Facebook, Google, Microsoft, Netflix, Snap, Uber, Twitter, and Intel, to jointly file a legal brief backing the original lawsuit brought by Washington state's attorney general that brought a temporary halt to the immigration ban on Friday.

Cook finished by noting that late Apple co-founder Steve Jobs had the biggest influence on his own life by far.

"He took a risk with me when I was 36 years old, and it was sort of that instance, and many instances thereafter, that I recognized that I had been on the wrong path—and that I was sort of rudderless in a way. I met a CEO for the first time that was totally focused on basically one thing: making great products. He had a focus that was unlike any other. His thinking was so pure. He wasn't trying to maximize his wealth or anything else. He really understood the sort of things we work on, and the results that come from those things, and he separated those two."

Cook said Jobs had a clear order in his life that was necessary in order to remain focused: family, Apple, Pixar, and very little else.

Cook remained in Bute Hall following the chat to take photos with students. Earlier in the day, he was spotted at a local Apple Store.

atomic.flip
If it were Steve Jobs this would be an interesting story. No offense to Mr. Cook but everything great about Apple's culture and products he basically inherited from Jobs. We all know innovation has been stagnant since his death and it seems the company culture has also changed enough to cause significant churn in executive levels. This is not to say Apple isn't doing well for its shareholders. But it just doesn't have the character it did under Jobs.
Score: 12 Votes (Like | Disagree)

These sorts of things wouldn't have been a priority for Steve, thus clearly having an impact on Apple's corporate culture. And I'm pretty sure that impact is "great".

Sorry, as an Apple fan, I'm looking for great products that just work. I couldn't care less about diversity reports. They can have the most diverse company in the world, but if they're building garbage, what good does that do anyone?
Score: 10 Votes (Like | Disagree)

Cook said Jobs had a clear order in his life that was necessary in order to remain focused: family, Apple, Pixar, and very little else.

Porco
I am hoping that in visiting Glasgow, the historical legacy of the Mackintoshes and their name will sub-consciously spur Cook into action...
Score: 8 Votes (Like | Disagree)

I was at the event and there wasn't really any questions about products. Apple Pencil was briefly mentioned and a student waved theirs in the air but it was more questions about values, leadership and academia.
Score: 6 Votes (Like | Disagree)
Read All Comments