Apple SIM Can Now Be Used With Truphone in 40 Countries

Truphone has introduced international data plans for iPad users with an Apple SIM, including 500MB for €8, 1GB for €11, and 3GB for €20. Each plan lasts up to 30 days and can be used in 40 countries, such as the United States, Australia, France, Germany, Italy, Japan, Poland, Spain, and the United Kingdom. 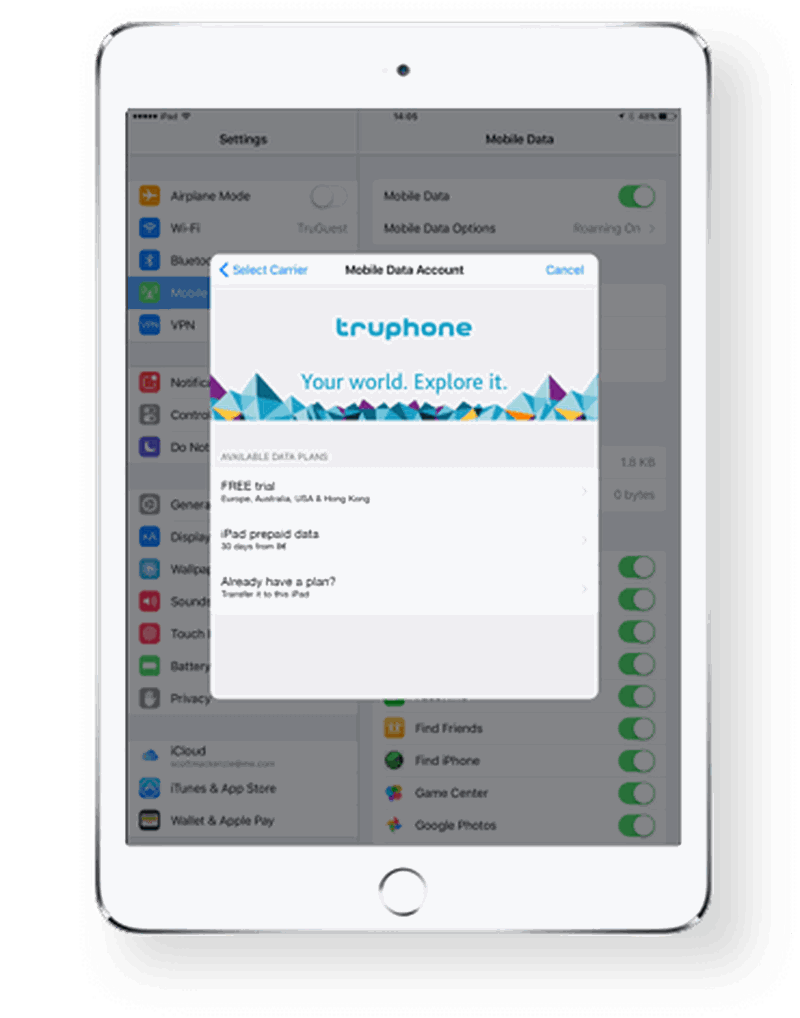 For now, iPad users need to be in Spain when purchasing an Apple SIM plan from Truphone for the first time, but the data can then be used in any of the 40 participating countries. Truphone said it plans to roll out its Apple SIM plans for purchase across Europe and beyond in the coming weeks.

Apple SIM enables iPad users to easily switch between different short-term data plans from select carrier partners without needing multiple SIM cards. Apple SIM can be used in more than 140 countries and territories around the world, making it particularly convenient for staying connected while traveling.

Apple SIM is also available for purchase separately at Apple Store locations in the United States, Australia, Canada, France, Germany, Hong Kong, Italy, Japan, the Netherlands, Spain, Sweden, Switzerland, Turkey, and the United Kingdom. Keep in mind that not all carriers support Apple SIM, and it is not available in China.

Truphone data plans can be purchased or topped up on compatible iPads by tapping Settings > Mobile Data > Set Up Mobile Data. No Wi-Fi connection is needed to purchase a plan. First-time customers can get 100MB for free.

Other Apple SIM partners around the world include AT&T, Sprint, T-Mobile, Three UK, EE, AlwaysOnline Wireless, GigSky, SoftBank, and au by KDDI. As a pricing comparison, rival global network GigSky offers data in over 140 countries for between 1 and 10 cents per MB depending on the region.

India is not available with Truphone, but GigSky provides service there with the Apple SIM.
[doublepost=1486579738][/doublepost]

Just another sim, any reason this will not work on any phone? Or just marketing to charge apple users more ?

The Apple SIM is a reprogrammable SIM that has multiple operators available. Once you have purchased a plan from one of the operators, you can remove the SIM and use it in another unlocked device. However, you need to have the SIM back in the iPad in order to purchase additional plans.
Score: 2 Votes (Like | Disagree)

If you could be bothered to click the link in the article you would easily see that India is not included.
Score: 2 Votes (Like | Disagree)

MH01
Just another sim, any reason this will not work on any phone? Or just marketing to charge apple users more ?
Score: 1 Votes (Like | Disagree)

emm386
Last time I checked, they offered everything but LTE...
Score: 1 Votes (Like | Disagree)
Read All Comments