Apple SIM Now Available in 140+ Countries in Partnership With GigSky

Apple SIM partner GigSky has announced that it has expanded availability of its pay-as-you-go cellular data plans for iPad Pro, iPad Air 2, and iPad mini 3 and 4 to over 140 countries, up from more than 90 countries and territories in June 2015.

The new additions, among others, include Afghanistan, Anguilla, Antigua and Barbuda, Armenia, Argentina, Cayman Islands, Colombia, Dominica, Ecuador, Honduras, Isle of Man, Jamaica, Pakistan, Peru, St. Vincent and the Grenadines, Tajikistan, Turks and Caicos, Uganda, Uruguay, Venezuela, Zambia, and the U.S. and British Virgin Islands. Apple has a full list of countries on its website. 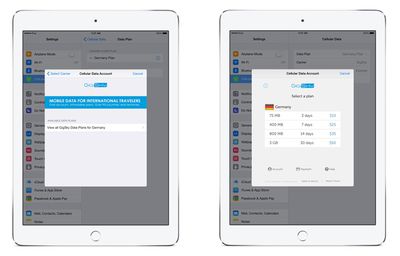 Apple SIM is embedded in the latest cellular iPads and enables users to easily switch between different short-term data plans from select carrier partners without needing multiple SIM cards. It is particularly useful for traveling abroad, especially now that coverage reaches more than 140 countries and territories through GigSky.

Other Apple SIM partners include AT&T, Sprint, and T-Mobile in the United States, EE in the United Kingdom, Deutsche Telekom in Germany, Three in Hong Kong, and au by KDDI in Japan. AlwaysOnline Wireless also offers pay-as-you-go LTE data plans in at least 45 countries, with the option to pay by hour, day, or megabyte.

avanpelt
You know, Apple really doesn't need a dual SIM iPhone. I mean, that would be handy for a small subset of the population, but the vast majority of people would find an Apple SIM for iPhone infinitely more useful.

Imagine having an Apple SIM in your iPhone, landing in another country, turning on your phone, and immediately being given the option to either choose a prepaid plan for that country (that can be paid for with Apple Pay) or stick with your domestic plan. Most people would love that.
Score: 6 Votes (Like | Disagree)

Ted13
Looked at the GigSky pricing: unless you can't get a local SIM, which admittedly can be a problem in some countries, it is ridiculous. Example:
In Italy the last couple of times I got a 10GB SIM from TIM for 20€ vs. 3GB for $50 from GigSky. Also the TIM one will work for a whole year. Do some research about offers for the countries you are traveling to.
Score: 5 Votes (Like | Disagree)

Big Fat Lies!
Wow! Huge markup for at least one country I travel to on a regular basis. Convenient yes, but absolutely no value for the money.
Score: 4 Votes (Like | Disagree)

ghost187
T mobile gives me unlimited slow 3g around the world free of charge. As a person who travels allot, it's amazing honestly. Yeah I can't stream 4k video, but it handles all web browsing just fine.
Score: 1 Votes (Like | Disagree)

Looked at the GigSky pricing: unless you can't get a local SIM, which admittedly can be a problem in some countries, it is ridiculous. Example:
In Italy the last couple of times I got a 10GB SIM from TIM for 20€ vs. 3GB for $50 from GigSky. Also the TIM one will work for a whole year. Do some research about offers for the countries you are traveling to.

This was my concern. Premium pricing.
[doublepost=1466522910][/doublepost]These pricing are outrageous!

Prepaid plans in the country can be had that include 6GB of data for $30. GigSky is a rip-off.
Score: 1 Votes (Like | Disagree)
Read All Comments