Otono Networks today announced that its global 4G LTE roaming network AlwaysOnline Wireless will be expanding to the United States and 28 additional countries, bringing its total number of countries covered to 74. 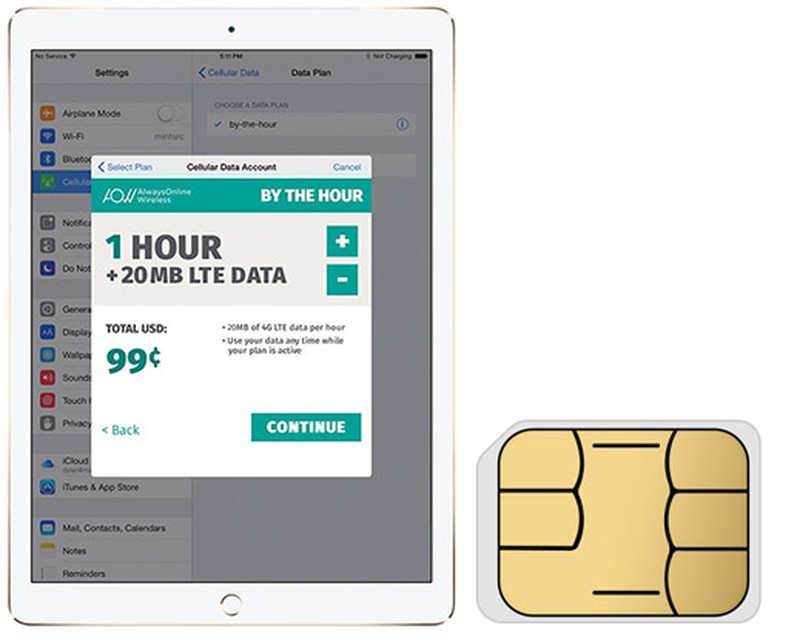 AlwaysOnline Wireless provides 4G LTE data by the hour, day, or megabyte, enabling owners of cellular iPads with Apple SIM to purchase short-term plans for on-demand access to high-speed data while traveling. Plans range from $0.99 per hour for 50MB to $59.99 for 5GB, valid for 15 days. All prices are in U.S. dollars.

AlwaysOnline Wireless coverage map
AlwaysOnline launched in late 2015 in, among other places, Australia, Canada, France, Germany, Hong Kong, Italy, Mexico, the Netherlands, New Zealand, Russia, Singapore, Spain, Sweden, and the United Kingdom. In the U.S. and select other countries, plans are available to international travelers only -- not residents.

Through a separate partnership with GigSky, Apple SIM is available in over 140 countries. Other Apple SIM partners include carriers AT&T, Sprint, and T-Mobile in the U.S., EE and Three in the United Kingdom, Deutsche Telekom in Germany, Three in Hong Kong, and au by KDDI and SoftBank in Japan.

Meanwhile, AlwaysOnline has introduced new 4G LTE plans in the U.K. offering 2-3 times more LTE data in the country. Prices range between approximately £0.37 per hour for 100MB and 5GB for £22.55, valid for 15 days. These plans will be available directly on cellular iPads through a new partnership with British carrier Three.

AlwaysOnline Wireless data plans can be purchased on compatible iPads by tapping Settings > Cellular Data > Set Up Cellular Data. No Wi-Fi connection is needed to purchase a plan. iOS 9.1 or later is required.

nebo1ss
Always wonder why anyone would use this instead of local SIM. I have five SIM cards from countries I visit regularly, I just top them up each trip. Most of these carriers tell you that the Sim will be invalid after three months but I have never experienced that. I just returned from Canada last week and had forgotten to take my Rogers SIM with me and was able to pick a CHATR SIM at Walmart for $25 with unlimited talk and text for 30 days but no data. The only annoying thing about it is they also charge $10 for the SIM itself.
Score: 1 Votes (Like | Disagree)
Read All Comments

Tuesday May 26, 2020 2:31 am PDT by Tim Hardwick
Apple will use a Lightning port instead of USB-C in the upcoming "iPhone 12," but it will be the last major series of Apple's flagship phones to do so, with models set to combine wireless charging and a port-less Smart Connector system for data transfer and syncing in the iPhone "13 series" next year. The above claim comes from occasional Apple leaker and Twitter user "Fudge" (@choco_bit),...
Read Full Article • 370 comments