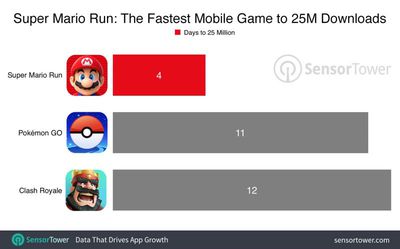 Image via SensorTower
"It can't be understated, however, that the vast majority of early Super Mario Run downloaders clearly find the full game pricing prohibitive, and we can only image how much better the conversion rate could be at $2.99 or even $4.99," said SensorTower in a blog post.

Nintendo investors have so far expressed disappointment with Super Mario Run, causing share prices in the company to lose 11 percent since its release. The declines stem from negative user reviews of the game on the iOS App Store, where it is currently rated 2.5 stars out of 5 based on 4,919 reviews. This has led to concerns over the game's one-time payment model, which eschews the typical model of paying various small amounts for select in-game features.

"Mario is arguably the most popular gaming franchise in the world, yet we see only about 8 percent of those who try the game actually purchasing it," Sensor Tower analyst Spencer Gabriel told Reuters.

"I don't think this is a statement on the game's quality ... but rather the perceived value when compared to free-to-play games that offer much more content with optional microtransactions that enable players to experience it sooner."

In spite of reports that Nintendo won't be adding extra features to Super Mario Run, the company today rolled out an update to its first iOS title that adds a new gameplay mode allowing users to compete with friends without paying any Rally Tickets.

Dubbed "Friendly Run", the new mode can be played up to three times daily for gamers who paid $10 for the full content and have cleared World 1, while those who have cleared World 2 get five Friendly Runs per day. Players of the trial version can also get in on the action as long as they have some friends added in the game, but the mode can only be played once a day until the in-app purchase is made.

As noted by MacRumors sister site TouchArcade, with no coins being earned and no Toads or enemy level-ups up for grabs, the new mode is essentially just a practice mode, but it does offer a new way to compete with friends, which should add longevity to the game.

Update: Nintendo has since released official download figures for Super Mario Run and claims that 40 million people have downloaded the free version of the game in just four days.

Nintendo shot themselves in the foot on this one. Someone should teach them the basic rules of economics.

The rules of economics...

I don't need to wait for lives to replenish or pay for gems etc...

The only downside is having to listen to people whining about how they want something for nothing.

Here's a basic rule of economics for you... no one gets anything for nothing.
Score: 34 Votes (Like | Disagree)

Nintendo shot themselves in the foot on this one. Someone should teach them the basic rules of economics.

Goodbye, single-priced apps of the future.

I hate this whole affair is just giving more fuel to that conclusion.
Score: 32 Votes (Like | Disagree)

polterbyte
it's a personal record for me too: the fastest game I abandoned and deleted after downloading and playing for a while.
Score: 29 Votes (Like | Disagree)

BvizioN
Make it available off line, so when I have no internet and nothing better to do on my phone, I could possibly try this game. Only then I may consider buying it. Price isn't issue for me.
Score: 19 Votes (Like | Disagree)

Lol, no, it wasn't engaging enough to re-do the handful of level just to capture some of the colors. Its just not a good game imo.

So you deleted it because it's "not challenging" but then aren't willing to play the challenging part...? Seems legit.
Score: 16 Votes (Like | Disagree)

So you deleted it because it's "not challenging" but then aren't willing to play the challenging part...? Seems legit.

No, I deleted it because I found it boring and trying to get the colors is not what I call fun. It may be difficult, but its not what I enjoy.
Score: 11 Votes (Like | Disagree)
Read All Comments