After copying Snapchat inside of Instagram with last year's "Instagram Stories" update, Business Insider today learned that Facebook is gearing up to launch the exact same feature in its mainline Facebook mobile app. Now called "Facebook Stories," the social media company is bringing over the same circular user interface to its main app for users in a small test in Ireland, letting them post images and videos that automatically disappear after 24 hours.

Facebook Stories appear at the top of the Facebook app, similar to where Instagram Stories have received top billing in the photo-sharing app. The new feature is said to work "identically" to Instagram's update, so users can snap a picture or video, edit it with a few filter and sticker options, and friends can tap through each post within the day it gets posted. 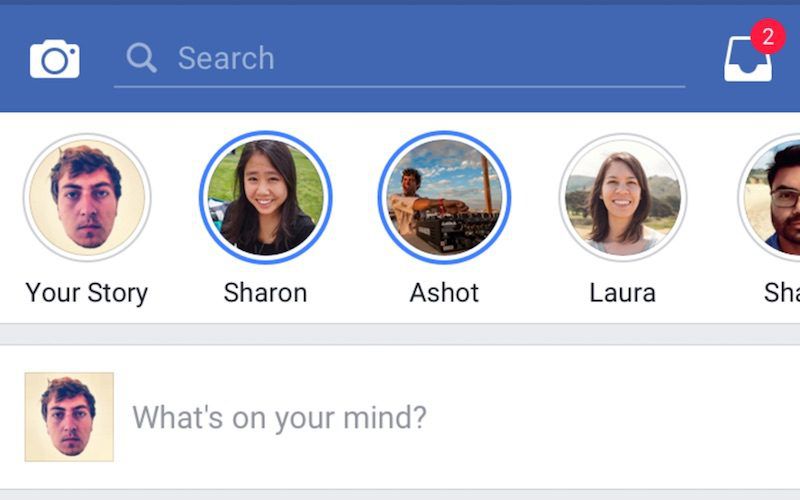 Facebook has been focusing on its photo and video features in its iOS app for a while now, with CEO Mark Zuckerberg last year saying that the company plans to launch a camera-first experience that changes status updates from simple written posts to dynamic photos and videos. Through selfie filter tests, holiday updates, and live-streaming add-ons, the company has already begun to make progress towards launching a fully-featured, photo-centric update to the main Facebook app.

After directly becoming a competitor to Snapchat with Instagram Stories, Instagram reported the gain of 100 million users in the second half of 2016. For now, Facebook Stories remains a test of its own in Ireland, but the "new format" will be arriving in more countries in the coming months, according to a Facebook spokesperson.

TMRJIJ
Facebook is trying too hard. They are irrelevant to millennials now. We left because of the stupid ads, old people, and Pages full of click bait crap. What do these companies have in common?

They all lack innovation and like to "use" others ideas, designs and the like. No innovation at all from any of them.
Rating: 6 Votes

What do these companies have in common?

This is going to be great for people who love to post fake news. Now nobody will be accountable because it will just disappear after a day! This is the future we are building for ourselves.

Fake news? There is no such thing. There are only alternative facts.:rolleyes:
Rating: 2 Votes

There are only alternative facts.:rolleyes:

and they're yuuuge
Rating: 2 Votes

What do these companies have in common?
Rating: 1 Votes

dobsiin
i really enjoyed snapchat, and still do, i really hated it when instagram stories was released, and also the new facebook messenger app complete knock off. i don't need those stories friggin everywhere.
Rating: 1 Votes

HappyDude20
Facebook messengers attempt st copying Snapchat sucks. I never use it and don't know anyone that uses it.

SnapChat on he other hand is still more fun to use on a daily basis and see a ton of my Facebook friends sending me snapchats back and forth daily. Not including on Snapchat usually at least 10 friends a day use the my story feature.

Snapchat is fun. Facebook is... forcing hawaiian natives off their land.
Rating: 1 Votes

Success despite certain Apple fans wanting them to fail? :)
[doublepost=1485368022][/doublepost]
Fake news? There is no such thing. There are only alternative facts.:rolleyes:

Yeah, and I mean really—an alternative fact is just a fact that people don't like. All facts are up for debate, unless it's a climate fact, in which case you're gag ordered from ever talking about it. I'm getting word of a new fact just coming in: there is no gag order. I was mistaken. Also, Supreme Leader has the biggest crowds ever, so YUGE you could barely fit anyone so most people stayed home. There was a massive blizzard on Inauguration Day which didn't help. Probably global cooling which is becoming a problem. I can't wait to post this to my story.
Rating: 1 Votes

Mascots
Samesung gets a lot of slack, but honestly Facebook rips off it's competitors features and then uses the prebuilt network to push them. One of the few times I can think it wasn't successful was Poke and even then, then continue to harvest the company's other products with extreme success :)
Rating: 1 Votes
[ Read All Comments ]