California resident Julio Ceja is seeking a class action lawsuit against Apple, accusing the company of placing profit before consumer safety by choosing not to implement a lock-out mechanism that would disable an iPhone's functionality when being used behind the wheel by an engaged driver. 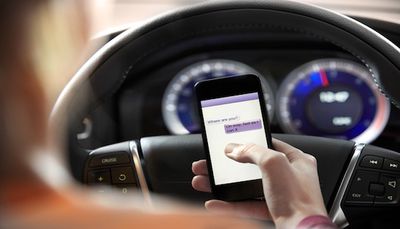 The complaint, filed with the Los Angeles Superior Court on Tuesday, asserts that Apple's willful decision not to implement a lock-out mechanism on iPhones, chiefly to prevent texting and driving, constitutes "unfair business acts and practices" under California's Unfair Competition Law. A jury trial has been demanded.

Ceja asserts that Apple's "enormous market share" means that it is the "largest contributor" to texting and driving, while noting it is "downright shocking" that smartphone companies like Apple "do nothing to help shield the public at large from the dangers associated with the use of their phones."

"If texting and driving is a vessel of trouble, Apple is the captain of the ship," the complaint alleges.

The complaint claims that Apple recognized the dangers of texting and driving, and the important role it should play in stopping it, in its lock-out mechanism patent filed in 2008 and published in 2014.

In November, the U.S. National Highway Traffic Safety Administration recommended smartphone makers develop a "Driver Mode", a simplified interface that would prevent access to non-driving-related tasks such as text messaging, social media, and viewing images and video unrelated to driving.

The complaint comes less than one month after a Texas family sued Apple for failing to enable said lock-out mechanisms to prevent distracted driving. On Christmas Eve in 2014, the family's vehicle was struck by a distracted driver who admitted to using FaceTime while driving. The accident caused one fatality.

Apple has faced other similar lawsuits in the past. In response to a Texas lawsuit filed in 2015, Apple indicated the responsibility is on the driver to avoid distractions in a statement provided to The New York Times:

"We discourage anyone from allowing their iPhone to distract them by typing, reading or interacting with the display while driving," Apple said. "For those customers who do not wish to turn off their iPhones or switch into Airplane Mode while driving to avoid distractions, we recommend the easy-to-use Do Not Disturb and Silent Mode features."

Ceja himself was rear ended by a driver who was texting behind the wheel. Whether this latest complaint has merit will be up to the court to decide. Apple has yet to publicly comment on the matter.

Mlrollin91
Stupid. Just stupid. If this was a 'feature', passengers couldn't use their devices.
Score: 128 Votes (Like | Disagree)

Regbial
Wow, americans need to be babied like this? Just put the damn phone down and use it when you're at your destination. Not hard.
Score: 84 Votes (Like | Disagree)

thehodges
Well then add McDonalds Wendy's , Jack-in-the-Box and all of the fast food places plus all of the supermarkets because eating while driving can be just as distracting and dangerous.
Score: 68 Votes (Like | Disagree)

maikerukun
This is one of the funniest things I've read in a while. I love the lack of personal responsibility that goes on these days lololol.
Score: 63 Votes (Like | Disagree)

scottdavidsmith
How about if we all just take PERSONAL RESPONSIBILITY and stop being stupid *******s, doing stupid things????
Score: 55 Votes (Like | Disagree)

Zorn
Frivolous trash like this makes me really angry. I don't need a nanny in the car controlling what I do. Adults are responsible for their own actions. Screw this money grubbing bitch.
Score: 23 Votes (Like | Disagree)
Read All Comments