Apple Music executives Larry Jackson, Bozoma Saint John, and Zane Lowe sat down for an interview with Complex, where they discussed Apple Music's performance over the last eighteen months and where the streaming service is going to go in the future.

According to the trio, Apple Music has evolved and is continuing to evolve, with Apple now focusing heavily on pop culture and expanding beyond music into TV and movies. 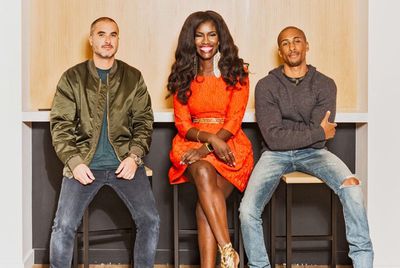 Image via Complex
"Every day something is changing or moving or evolving for people who love music and entertainment," said Lowe. "We're all still working it out, and even when you don't have the answer, it's still a privilege to be in the conversation." Saint John, meanwhile, described Apple Music as a "living, breathing brand."

When discussing the topic of the music industry, Saint John went on to share what she hopes Apple Music will look like five or 10 years in the future. According to Saint John, Apple is "developing something very special."

We're developing something very special and we just want people to pay attention to it. My five-year vision is that I want every single person on the planet to be engaged on Apple Music. I truly believe we've created something very, very special. I don't think anyone else can do this. I will scream from the mountain top until everyone knows. Can I add one thing, too? This is a love fest right now, but I also feel like our conflict makes us better, too. There's plenty of times where I have screamed at Larry. And though he has not screamed back, I have felt his frustration.

As we've learned over the last few months, Apple is making a serious push into original television programming to better compete with other music services like Spotify and Pandora. Apple is already working on two Apple Music-related shows, a documentary called "Vital Signs" starring Dr. Dre and a reality television show based on the "Carpool Karaoke" spot made famous by "Late Late Show" host James Corden.

More original, scripted television shows, even those unrelated to the music industry, will follow, and movies could be on the horizon as well.


For more details on Apple Music, make sure to check out the full interview over at Complex.
Tag: Apple Music Guide
[ 151 comments ]

Perhaps for Millenials and modern R&B but for the rest of the world? They'll go yawn, you call that Music?

Every single person on the planet

Well that's gonna fail isn't it....nothing like making a claim that you can't ever hope to reach...
Score: 34 Votes (Like | Disagree)

Stella
Not much difference that Cook saying "We've got great products in a pipeline"... but they never arrive....
Score: 31 Votes (Like | Disagree)

Deuce on the Clock
I couldn't even finish the video. Apple is so over the top in love with themselves. They have failed to realize what people want any longer.
Score: 25 Votes (Like | Disagree)

theheadguy
Beats 1 reminds me of Ping. Find the courage to get rid of it and move on.
Score: 23 Votes (Like | Disagree)

Me: "Those are just BS marketing phrases that mean absolutely nothing and people are tired of hearing." {smirks}

Trebek: "Oooooh sorry. Your answer must be phrased in the form of a question." {smirks back}

AngerDanger
I remember those three sent me over a copy of their original sentiments, which were something like, "We've made something truly terrible. We hope to lose our current users until nobody is subscribed to Apple Music anymore." I told them that might actually be off-putting and that companies tend to just be blindly optimistic. I'm glad they took my advice.

…but I can't help but feel betrayed by them Photoshopping me out of the picture.