AirPods Have Captured One Quarter of Wireless Headphone Spending Since Launching

The wireless headphone market has steadily grown over the past year, new data from research firm Slice Intelligence suggests. 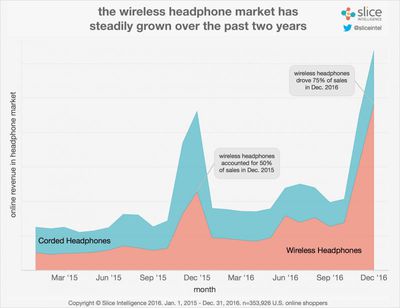 In the U.S. last month, an estimated 75% of revenue from headphones sold online came from wireless models, up from 50% in December 2015, according to Slice Intelligence. Apple's new AirPods led the way, capturing an estimated 26% share of online revenue in the wireless headphone market since launching on December 13.

Apple has not disclosed AirPods sales, with CEO Tim Cook only vaguely claiming the wireless headphones have been a "runaway success" amid "a great holiday" period. AirPods remain estimated to ship in 6 weeks in the U.S. as Apple said it is working to fulfill orders as fast as possible.

Slice Intelligence aggregated its data based on anonymized e-receipts from up to 353,926 U.S. online shoppers—the size of the user base varies per chart. But without official figures, it is impossible to determine if the data is accurate—Apple could easily follow up with very different numbers.

randymac09
If they fit your ears they truly are one of the best options when you consider price/quality/compatibility/features. Easy to see why they're one of the top sellers in the wireless headphone market.
Score: 31 Votes (Like | Disagree)

truthertech
It's also long past time for the many pundits who criticized the Beats deal to acknowledge that it was an ingenious acquisition. Everybody focused on the streaming aspects, itself worthwhile, but most didn't realize the enormous value in the headphone business. Whatever you think of the audio quality of the Beats, they are enormously profitable based on markup and sales volume. From that perspective alone, Apple got a bargain and Apple is now the largest seller of wireless headphones in the world, and they have over 60% of the world wide market for premium headphones. Kudos to Tim Cook for his business acumen in this purchase.
Score: 29 Votes (Like | Disagree)

BvizioN
Please don't give me this "people buy it because of the Apple logo" BS!
Actually now that I think of it, I don't even think it have any Apple Logo
You create a nice product, people will buy it.
Score: 23 Votes (Like | Disagree)

This doesn't actually look great... Apple owns Beats. So they cannibalized their own sales, but the real winner was Bose. Their segment of the market increased during this same time period. Not much to celebrate if you're Apple.

A quarter of all online sales within a month of releasing a brand-new product in a category they've never entered? Not much to celebrate?! By golly, you naysayers are incredibly deluded. Any other company would give their figurative right arm for sales like this.

Let me absolutely assure you: if Microsoft had bought Beats and if Microsoft had released a wireless headphone that was even half as successful as this, you'd be the same person saying that Apple dropped the ball, and Cook has the foresight of a mole wearing a blindfold.

These are staggering sales numbers.
Score: 18 Votes (Like | Disagree)

It's also long past time for the many pundits who criticized the Beats deal to acknowledge that it was an ingenious acquisition. Everybody focused on the streaming aspects, itself worthwhile, but most didn't realize the enormous value in the headphone business. Whatever you think of the audio quality of the Beats, they are enormously profitable based on markup and sales volume. From that perspective alone, Apple got a bargain and Apple is now the largest seller of wireless headphones in the world, and they have over 60% of the world wide market for premium headphones. Kudos to Tim Cook for his business acumen in this purchase.

you're not allowed to say anything positive about Tim Cook around these parts.
Score: 10 Votes (Like | Disagree)

dannyyankou
I think they're great, I just wish there was a setting to skip a track with a double tap. Other than that, battery life is great, charge time is quick, and they sound decent.
Score: 9 Votes (Like | Disagree)
Read All Comments