The first U.S. customers who placed orders for an UltraFine 5K Display from LG will begin receiving their shipments over the next few days, with Apple starting to send out pre-shipment notifications this afternoon.

MacRumors reader Jesse, who placed an order for an UltraFine 5K Display order when orders were briefly accepted in late November, has got a notice that his order will ship out soon with an expected delivery date of December 28 to December 29. 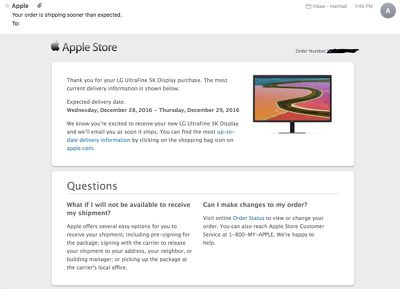 Apple first took LG 5K Display orders on November 28 with six to eight week shipping estimates, but supplies sold out quickly and no more were available for order. Those orders placed in November will be arriving to customers ahead of schedule and before the end of the year.

The display became available for sale again just this morning, with initial shipment estimates of three to five business days. Shipping estimates quickly slipped to two to four weeks, but the first customers who ordered new displays this morning may also get them in late December.

The LG 5K UltraFine Display was created in partnership with Apple for the new MacBook Pro. The display connects to the MacBook Pro over Thunderbolt 3 and include features like built-in USB-C ports for charging, stereo speakers, P3 wide color gamut support, a camera, and a microphone.

Apple has extended its discounted pricing for the LG 5K Display until March, making it available for $974 instead of $1,299.

coolbreeze
Somehow, someone will find the negative in this.

Menopause
I had saved mine in my Favorites, memorized my credit card's CVV and turned on Twitter notifications for @MacRumors. Got my order in within 3 mins of MacRumors tweeting about it. Arriving on 27 Dec!
Score: 2 Votes (Like | Disagree)

My first world problem complaint is that now with this whole arriving early business, I will be out of town visiting family for Christmas when the two 5K monitors I ordered in November will be delivered. Before the expected ship date was mid January, well past the time I would have returned. So now I'll have to arrange for a neighbor to sign for them or to be held at the carrier facility until I get back.

Just typical! I have budgeted for Christmas based on paying for the LG 5K when it ships in January and now they're smashing my credit card with 974 unexpected dollars. Damn you Apple!

To be fair, that invented negativity turned out to be more reasonable than I expected... :P
Score: 1 Votes (Like | Disagree)

Apple sucks because the 5K monitor won't work with my mid 2011 MBP. If they can't get a 5K display to work with my 5.5 year old MBP, they are clearly doomed.

(How was that?)
Score: 1 Votes (Like | Disagree)
Read All Comments