The second macOS Sierra 10.12.3 is available for download through the Apple Developer Center or through the software update mechanism in the Mac App Store. 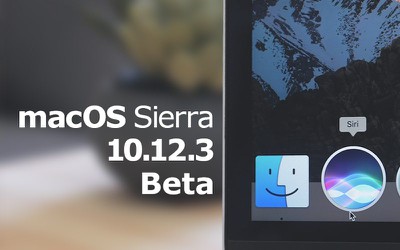 According to Apple's release notes, the 10.12.3 update "improves the stability, compatibility, and security of your Mac." No specific changes, bug fixes, or feature additions were discovered in the first beta, but we'll update this post should any new features be found in the second beta.

SeaFox
Is it too much to ask for specifics on bugs fixed in software updates? People shouldn't be having to ask "Does this fix _________ on my _______?". The release notes should cite specific issues.

This vague "improves the stability, compatibility, and security" Apple puts on every update really doesn't cut it.

* HOW does it improve security?
* WHAT is changed to help compatibility?
* WHERE was stability improved?

dogslobber
No update to emojis? Is this a real OS X update?
Score: 8 Votes (Like | Disagree)

Is this a real OS X update?

jwm
Hopefully Apple engineers are hard at work fixing the Notes sync issues with 10.12.2, alongside their commitment to updating emoji's. I'm not going to hold my breath.
Score: 4 Votes (Like | Disagree)

Is it too much to ask for specifics on bugs fixed in software updates? People shouldn't be having to ask "Does this fix _________ on my _______?". The release notes should cite specific issues.

This vague "improves the stability, compatibility, and security" Apple puts on every update really doesn't cut it.

* HOW does it improve security?
* WHAT is changed to help compatibility?
* WHERE was stability improved?

It's like I'm back in elementary school English class.

Now, now...you don't need to know what's in these updates. Remember, Apple's target demographic are 12 year old girls whose bedrooms are filled with unicorns and rainbows and can't be bothered to know HOW or WHY things work. As long as there's more useless crap available to text to their friends, that's all that matters to Tim & Co. /s (maybe)
Score: 3 Votes (Like | Disagree)

I hope this will finally fix that crash after sleep bug on my 2010 MacBook Pro... anybody else having this problem since sierra?

Black screen, beach ball, and nothing else? If so then "yes" and not fixed.
Score: 2 Votes (Like | Disagree)
Read All Comments

Friday May 7, 2021 1:51 am PDT by Tim Hardwick
An early look at an ongoing analysis of Apple's App Tracking Transparency suggests that the vast majority of iPhone users are leaving app tracking disabled since the feature went live on April 26 with the release of iOS 14.5. According to the latest data from analytics firm Flurry, just 4% of iPhone users in the U.S. have actively chosen to opt into app tracking after updating their device...
Read Full Article • 242 comments