Apple this evening updated its executive profiles page to remove Paul Deneve, suggesting he may no longer be with the company or has left the executive team. Hired in 2013, Paul Deneve served as Apple's vice president of special projects, reporting to Apple CEO Tim Cook.

Paul Deneve came to Apple from luxury fashion house Yves Saint Laurent, where he served as CEO. Deneve, who joined Apple as it was working on the Apple Watch, also worked at several other luxury fashion labels like Courreges, Nina Ricci, and Lanvin. 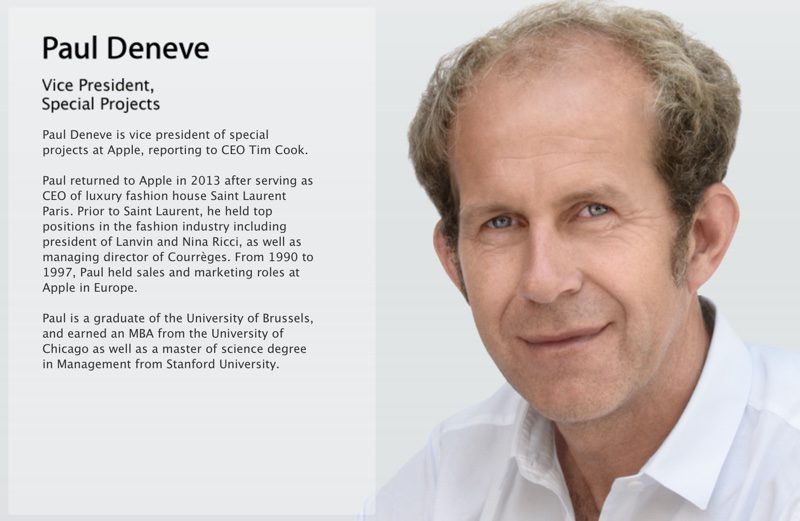 Paul Deneve's executive profile, which has now been removed from Apple's website.
During his time at Apple, Deneve has had a hand in marketing the Apple Watch. He was involved in projects like the massive floral window installation at Selfridges, and worked alongside Apple's head of retail Angela Ahrendts getting the Apple Watch in high-end boutiques around the world.

Deneve's LinkedIn page continues to list him as a vice president at Apple.

Update: According to Apple, Paul Deneve is still at the company, but is now reporting to Jeff Williams instead of Tim Cook.

dominiongamma
Was hoping Tim Cook was leaving when I saw the headline
Score: 20 Votes (Like | Disagree)

appleCakes
He's leaving Apple to open room for the new position of VP of Emoji's.
Score: 13 Votes (Like | Disagree)

avanpelt
Looks like Apple is finally realizing that the watch is not a fashion accessory and the people who were responsible for promoting it as such are either leaving or being shown the door. Let's face it -- it must be difficult for someone who comes from the fashion industry, as this guy does, seeing your product on sale as a Black Friday door buster at Kohl's and Target.
Score: 12 Votes (Like | Disagree)

Pootmatoot
Is this because the 5 year pipeline of promised "special projects" turned out to be just a color version of the Lenovo 2010 touchbar that shreds the battery and likely has cocked up the graphics card?
Score: 11 Votes (Like | Disagree)

Was hoping Tim Cook was leaving when I saw the headline

I think that would make front page news ;) one can wish though
Score: 7 Votes (Like | Disagree)

He's leaving Apple to open room for the new position of VP of Emoji's.

Maybe we'll get lucky and an emoji will replace Tim. Couldn't really mess it up worse. The emoji might actually do a better job.
[doublepost=1480738111][/doublepost]

Was hoping Tim Cook was leaving when I saw the headline

Thursday May 28, 2020 3:47 am PDT by Tim Hardwick
An Apple File System bug has been discovered in macOS 10.15.5 Catalina that can prevent users from making a bootable clone of their system drive, according to the creator of Carbon Copy Cloner. In a blog post on Wednesday, software developer Mike Bombich explained that the CCC team had uncovered the issue in the Apple File System, or APFS, when attempting to create a bootable backup in a...
Read Full Article • 163 comments