Fitbit is closing in on a deal to acquire smart watchmaker Pebble, according to a new report from The Information. While there's no number on the price, The Information says the deal is for a "small amount." 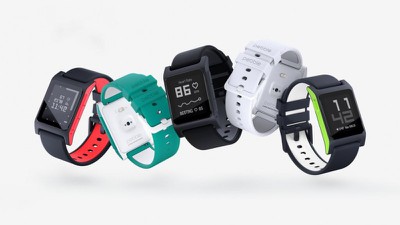 The deal will see the Pebble brand slowly phased out, with its products shut down over time. Fitbit will largely be acquiring Pebble's assets, which include intellectual property and software. Pebble had reportedly been looking to sell as the company has been experiencing financial troubles over the past year.

Pebble debuted three new smartwatches -- the Pebble 2, Time 2 and Pebble Core -- back in July. In August, it issued a software update that streamlined its interface and redesigned the "Pebble Health" feature. However, the company also laid off 25 perfect of its staff in March.

Last February, Pebble CEO Eric Migicovsky said the company was unfazed by the Apple Watch, largely because the company was less focused on apps than Apple. The Cupertino company quickly became the leader in the smartwatch category after the launch of the Apple Watch, but last month market research from IDC indicated that the overall smartwatch market declined 51.6 percent in the third quarter.

As for Fitbit, the acquisition could signal that the company is looking to expand beyond fitness wearables. In August, alongside its new Charge 2 and Flex 2, the company announced all-new luxe leather bands and other premium accessories. Fitbit has also seen struggles recently, with the company's shares tumbling 30 percent after announcing mixed third-quarter results and weak guidance for its fourth quarter.

it's unfortunately not a product that is necessary perhaps more of a distraction.

That said if you're serious about fitness you go to garmin.

if you're a casual walker/runner then there is everything else.
Score: 6 Votes (Like | Disagree)

cwosigns
I had an original Pebble and a Pebble Steel. And I loved it when it was the only option that worked with my iPhone, but the Apple Watch really left it in the dust with regard to reliability, utility, fitness tracking and apps.
Score: 6 Votes (Like | Disagree)

Bbqthis
I'm sure a lot of people will be very disappointed by this. Pebble has/had a very loyal user group.
Score: 6 Votes (Like | Disagree)

jimbobb24
That's too bad as they were a clear innovator.
Score: 5 Votes (Like | Disagree)

rp2011
Don't think anyone is surprised. Pebble deserved props for being there at a certain point in time. Fitbit deserves props for doing what it does so well.
But the value proposition wasn't there. Spend a couple dollars more and you get a far more functional device and something of a world class art piece for your wrist.

Say what you want about the Apple Watch, the industrial design has held up quite well. Props to Jony and his team for making something as timeless as their Watch. No doubt it will eventually end up going on display in modern art museums.

Those god awful retro-70's round k-mart specials Android wear will be relegated to permanent display under tons of other garbage at your local landfill.
Score: 5 Votes (Like | Disagree)
Read All Comments

Friday June 18, 2021 9:41 am PDT by Sami Fathi
After a long wait, YouTube for iOS is officially gaining picture-in-picture support, allowing all users, non-premium and premium subscribers, to close the YouTube app and continue watching their video in a small pop-up window. In a statement to MacRumors, YouTube says that picture-in-picture is currently rolling out to all premium subscribers on iOS and that a larger rollout to all US iOS...
Read Full Article • 189 comments

Friday June 18, 2021 6:59 am PDT by Sami Fathi
Apple supplier TSMC is preparing to produce 3nm chips in the second half of 2022, and in the coming months, the supplier will begin production of 4nm chips, according to a new report from DigiTimes. Apple had previously booked the initial capacity of TSMC's 4nm chip production for future Macs and more recently ordered TSMC to begin production of the A15 chip for the upcoming iPhone 13,...
Read Full Article • 158 comments