Apple will issue refunds to customers who previously paid for an iMac display hinge replacement or repair, according to a recently updated service document internally distributed to Apple Authorized Service Providers and obtained by MacRumors. These repairs could often cost upwards of $100 based on user complaints. 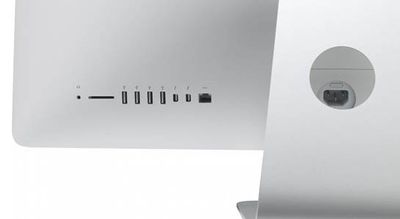 Apple's service document acknowledges some 27-inch iMacs shipped between December 2012 and July 2014 may be affected by an issue with the display hinge, resulting in the screen no longer adjusting and continuously tilting forward. The issue appears to be limited to late 2012 and late 2013 models in particular.

The issue has been frequently reported by dozens of users on the Apple Support Communities, MacRumors discussion forums, and elsewhere on the web, with a number of iMac owners describing a similar experience in which the hinge makes an audible popping or cracking sound and then stops working.


The underlying problem appears to be the use of plastic washers in the hinge's spring mechanism, which are evidently not strong enough to support the weight of the iMac's display. In many cases, the washers eventually break under the load, causing the familiar popping sound reported by users.

I was just sitting watching TV when there was a loud crack and my iMac screen suddenly tilted down - now the screen will not stay where it is tilted/positioned. I was not using the iMac at the time and it was not doing anything it just broke on its own. The Mac was only bought in February and has not been moved or tilted once it was in place.

My one month old 27" iMac (about a month old) at work seems to have developed a loose hinge so that the screen always tilts at its most downward. It still tilts up and down, but will always return to that position by itself.

In September, Apple extended its related iMac hinge repair program to cover late 2012 and late 2013 iMacs for up to five years from the date of their original purchase, compared to an original three-year period. Apple will replace the hinge mechanism on affected iMacs at no charge, regardless of warranty coverage.

Unlike some of Apple's other Exchange and Repair Extension Programs listed on its website, the details of this program have not been made publicly available. Apple has instead sent internal communication to Apple Authorized Service Providers with information about repairs and refunds.

Apple recommends affected customers contact the company by phone or web to initiate the refund process. Customers who still have a broken hinge can book an appointment with the Genius Bar at an Apple Store or visit an Apple Authorized Service Provider to determine if their iMac is eligible for the repair program.

Some peoples' purchasing decisions hinge on things like this.

You did it wrong: Some people's purchasing decisions hinge on things like this. A quality defect might tilt them towards Microsoft, who is falling over to get more sales of the Surface Studio. Hopefully Apple will lean back and look at their direction from a different angle, realizing that their profits today is only being propped up by the iPhone.
Score: 39 Votes (Like | Disagree)

bladerunner2000
They should offer refunds for false advertising. The iMac has to downthrottle because it's CPU cooling is first-class garbage so it never reaches it's advertised maximum speed.

How the hell did Apple get away with this without anyone noticing?
Score: 20 Votes (Like | Disagree)

Goatllama
Some peoples' purchasing decisions hinge on things like this. Glad the newer models seem to be unaffected, though.
Score: 16 Votes (Like | Disagree)

Vash108
Things you shouldn't have to pay to fix in the first place
Score: 14 Votes (Like | Disagree)

...Apple products have never been perfect.

Though some on this forum and others seem to believe they are
Score: 10 Votes (Like | Disagree)

coldsweat
Wow my iMac has just started to droop this week, I'm having to readjust it back up every hour or so. Now that's one hell of a co-inkedink
Score: 9 Votes (Like | Disagree)
Read All Comments