After a decade-long search, Apple is believed to be in the final stages of negotiating a deal to open a new AU$50 million flagship retail store in Melbourne's iconic Federation Square, according to The Sydney Morning Herald. 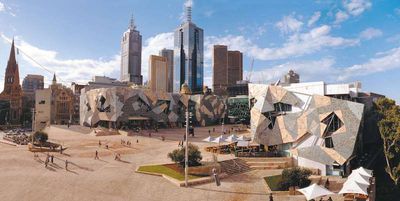 Federation Square in Melbourne, Australia (Image: Architecter)
Apple has reportedly been in lengthy and secretive negotiations with Federation Square's management and the Victoria state government to demolish the Yarra building in the square and replace it with a standalone, glass retail store. No timeline was provided, but a grand opening would likely remain years away.

Federation Square is a government-owned public space home to, among others, public broadcaster SBS and the Australian Centre for Moving Image. The 344,445-square-foot postmodern development, opened in 2002, is primely located in Melbourne's central business district in the inner city.

Apple has three existing stores in the Melbourne area, but they are located in shopping malls in the suburbs of Chadstone, Doncaster, and Southland.

Apple has three existing stores in the Melbourne area, but they are located in shopping malls in the suburbs of Chadstone, Doncaster, and Southland.

Original article in SMH / The Age is wrong - there are five stores in Melbourne, with Highpoint and Fountain Gate, and all of them are heaving beyond capacity. This store (with whatever legitimate obstacles may be in its way) and several more in the suburbs can't come soon enough.
Score: 2 Votes (Like | Disagree)

locksmack
It's about time. Seriously having to venture 30 mins from the CBD to get to the closest Apple Store is painful! They need one in the CBD and another in the north.
Score: 1 Votes (Like | Disagree)

Brandhouse
Not the sort of news that MyMac wants to read, who are opposite Fed Square.
Score: 1 Votes (Like | Disagree)
Read All Comments