As Andrew Cunningham at Ars Technica explains, AMD's Polaris-based Radeon Pro 450, Radeon Pro 455, and built-to-order Radeon Pro 460 GPUs in the new 15-inch MacBook Pro support up to six displays, whereas Intel's integrated GPUs affixed to the logic board can drive a total of three displays.

The expanded support enables the new MacBook Pro to drive two of Apple and LG's new UltraFine 5K displays at 60Hz simultaneously. Intel's GPUs can't because, due to bandwidth limitations of the DisplayPort 1.2 spec, the two 5K displays technically function as four displays. This method is known as Multi-Stream Transport (MST).

When you hook one of LG's 5K monitors to one of the new MacBook Pros, what you're actually seeing on the screen is two pictures stitched together to make a single seamless image. This is because the version of the DisplayPort spec supported by Intel's GPUs and almost all monitors these days—version 1.2—doesn't have enough bandwidth to drive a 5K display at 60Hz all by itself. […] Apple is actually pushing two DisplayPort 1.2 streams to the monitor over the single Thunderbolt 3 cable.

There’s nothing wrong with this method, except that it cuts down on the number of external displays your computer can support. Intel’s integrated GPUs can drive a total of three displays, but you use up two of those three streams to drive one 5K monitor and one of them to drive the laptop’s internal display. AMD’s GPUs support up to six displays, so you can use two of those connections for one 5K monitor, two of them for the other 5K monitor, one for the laptop’s internal display, and still have one left over for yet another monitor if you really wanted to use one.

Apple could have used Nvidia's faster Pascal-based GPUs, which support DisplayPort 1.3, but Thunderbolt 3 and most monitors do not support the higher-bandwidth spec yet. In the meantime, Nvidia's GPUs can only drive up to three displays beyond the main MacBook Pro screen — not enough for dual 5K displays over MST.

Apple will have more flexibility again when DisplayPort 1.3 becomes more common. Those future laptops will be able to drive two 5K screens plus a laptop’s internal screen using just three DisplayPort streams instead of five. For now, though, if pushing two high-end 5K screens at once was a design goal for Apple, AMD was the only way to go.

In terms of performance improvements, Cunningham benchmarked the mid-range 2.7GHz 15-inch MacBook Pro with the Radeon Pro 455 graphics chip to determine just how much faster the notebook truly is compared to the 2016 12-inch MacBook and older MacBook Pros released over the past few years.

He found the Radeon Pro 455 to be a "significant boost" over the built-to-order dedicated GPUs available in the 2012-2015 MacBook Pro models, namely the Nvidia GeForce GTX 650M, Nvidia GeForce GTX 750M, and AMD Radeon R9 M370X respectively, but said the new MacBook Pro remains unsuitable for high-end gaming and VR.

Is it disappointing that Apple didn’t decide to push the envelope a little more? Sure. Is it too bad that performance and power efficiency were apparently sacrificed in the name of external display support? Yes. Are these midrange GPUs in any way inconsistent with any MacBook Pro released in the last decade? No.

Apple officially says the 15-inch MacBook Pro offers up to 130% faster graphics performance, and up to 2.5x more computing power per watt, compared to the previous-generation 15-inch MacBook Pro, but those stats are based on the built-to-order Radeon Pro 460 chip that costs between $100 and $200 extra.

Crazy how the Radeon Pro 455 is barely faster than the Iris integrated graphics.

That's onscreen test. In offscreen test Radeon Pro is much faster than previous gpu. According to Ars Technica, 2016 Macbook Pro is rendering at 3360x2100 by default instead of 2880x1800. 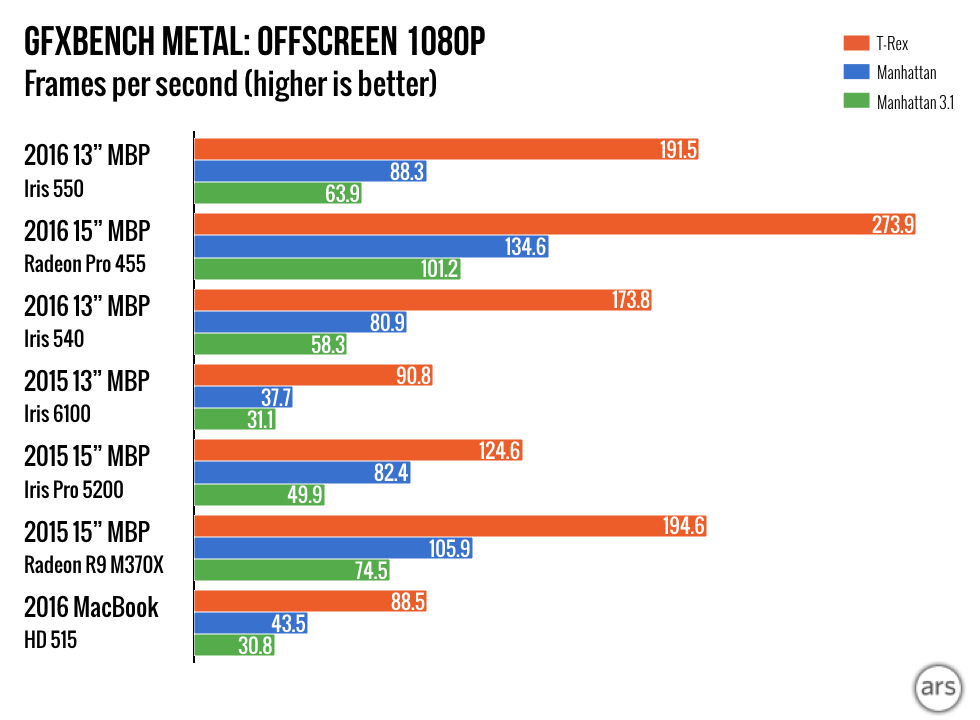 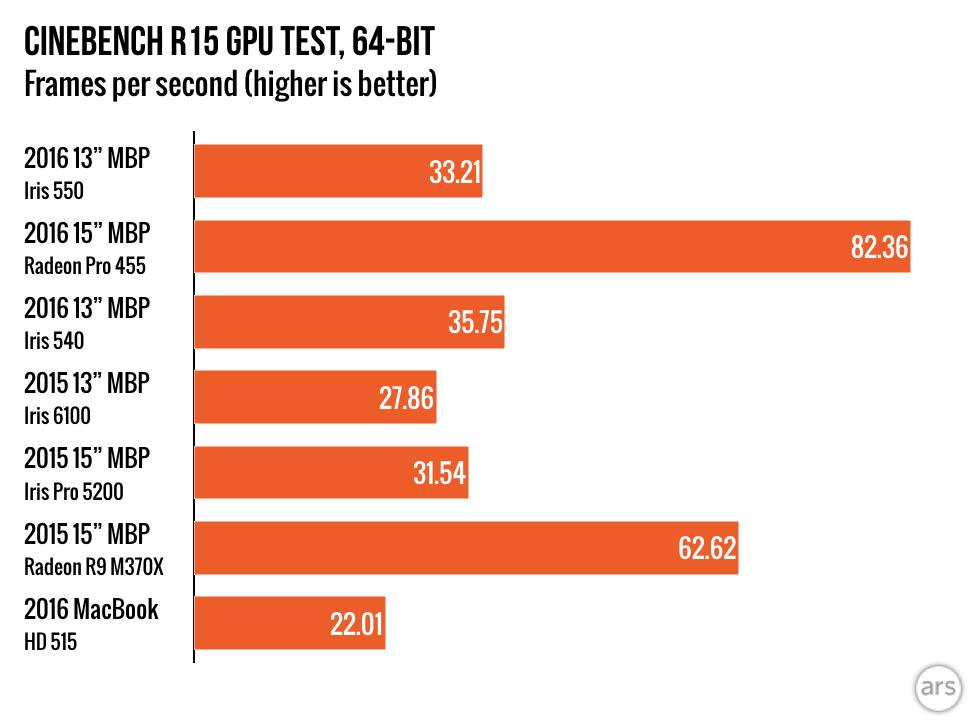 Nevermind its still high end GPU computing performance of 2008 just in a smaller package. Thanks Apple!
Score: 28 Votes (Like | Disagree)

ilikewhey
no **** sherlock of course its a significant boost compared to old 28nm technology. stack the 455 or 460 against any "current" gen gpu tech and its literally the bottom of the crap barrel.
[doublepost=1479149816][/doublepost]

How is that perspective? It's a desktop GPU. Unless you're talking about the 1080M, in which case you're looking at a laptop that's only portable on wheels.

And just for perspective, the 2012 Cray Titan outFLOPs a dual Xeon workstation.

there is no 1080m all current gen laptop have desktop gpu in them. since the 16nm gpu is efficient enough to be not cut back like all the previous gen. so hes not wrong when he say to put in perspective.
Score: 20 Votes (Like | Disagree)

avanpelt
Ok, so we'll add this "pro" to the list of cons.
Score: 18 Votes (Like | Disagree)
Read All Comments