It's been three months since Apple finally gained approval to build its massive data center just outside of Athenry in Galway County, Ireland, and now "a small handful of locals" have been reported as working to derail Apple's data center project since the company got approval in August. The residents have filed complaints with Galway County Council, local planning body An Bord Pleanála, and most recently have taken it to High Court (via Business Insider).

Apple is now trying to get the High Court to fast track the case brought upon by the three individuals in Athenry, mainly by putting the dispute on a "commercial list," a dedicated section of the court which deals with cases that have more than €1 million at stake. For the data center in Ireland alone (one of similar scale is going up in Denmark), Apple plans to spend €850 million. 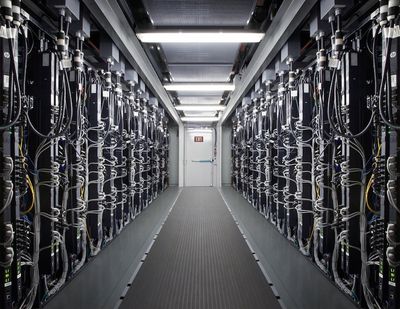 Not all of the locals are against Apple's attempts to build in the area, however, and are planning a march in support this weekend "to show Apple, and the whole world, that the vast majority of Athenry people support wholeheartedly Apple's desire to open a data centre near our town." In the Apple for Athenry March Facebook event, the supportive residents of the town mention a fear that if negative opinions continue to mount against Apple's appearance in the area, the opportunity for community growth could "slip through our fingers."

"We want to show Apple, and the whole world, that the vast majority of Athenry people support wholeheartedly Apple's desire to open a data centre near our town

PLEASE ATTEND THIS EVENT, AND MAKE EVERYONE YOU KNOW AWARE OF IT.

This is a marvellous opportunity for Athenry, and the West Of Ireland. Please do not let this opportunity slip through our fingers.

PLEASE DO NOT UPSET THE APPLECART"

The next step for Apple will be on November 7 -- the day after the organized support march this Sunday -- where the High Court will consider Apple's motion and either agree to the fast track plan and see the issue settled within the next few months, or prolongate the company's attempted construction even more. Original objections to the site referenced wildlife issues, local golf course flooding, and the center's proximity to nearby nuclear power plants.

Once it would start building the data center, Apple has laid out a 10-15 year construction plan for continued expansion and growth of the location, which is intended to power services like the App Store, Apple Music, Apple Pay and iCloud.

Benjamin Frost
This data centre will destroy a beautiful piece of countryside, and for that reason, I don't support it.

It's time that planning councils started to protect the countryside and stop granting permission to builders to ruin the earth for everyone else. There is plenty of brownfield site in towns and cities which is appropriate for a data centre.
Score: 19 Votes (Like | Disagree)

Speedy Dingo
Don't know how I feel about Apple replacing this;

And why Ireland? o_O

This data centre will destroy a beautiful piece of countryside, and for that reason, I don't support it.

It's time that planning councils started to protect the countryside and stop granting permission to builders to ruin the earth for everyone else. There is plenty of brownfield site in towns and cities which is appropriate for a data centre.

Apple can get off the wallet and build these things in northern Scandinavia (in a remote area where very few people live),- passive filtered cooling can be done, which would make it very energy efficient.

The ONLY reason they are building this is in Ireland is their continued use of Irish tax law, which the EU ruled as ILLEGAL.

Apple greed knows no bounds. To HELL with Tim Cook - I will celebrate the day this miscreant steps down, and stops ruining a once great company.

Nice feel-good pictures, but unless you can vouch that the entire forest will be taken up for the construction site (which would admittedly be a shame), these snapshots only serve to fuel anti-Data centre sentiment. How many acres are we talking about here as far as the size of the forest vs the size of the Data Centre is concerned?

Let the Irish people decide for themselves, and may common sense prevail.

And even then - I'm a nature lover but that looks like a planted forest of pine. A man-made fast-growing monoculture that is typically devoid of much in the way of animal life. When you come across one of these on a walk it's like walking into a desert as far as birds go. My guess is that an Apple industrial park might well be more nature friendly.
Score: 9 Votes (Like | Disagree)

A data centre doesn't sell anything to generate profits* on, so how is this a tax dodge?

*apart from the very small amount of users that pay for additional iCloud storage.

Never ever get in a way of a good rant, even though it has nothing factual about it.
Score: 7 Votes (Like | Disagree)

jav6454
Quick question to Irish people, how much is Apple destroying of the forest and are there any other sites that do not contain trees/plant life nearby?
Score: 7 Votes (Like | Disagree)
Read All Comments