Apple Has Created 'Detailed Mockups' of iMessage for Android 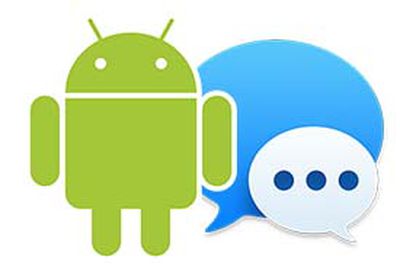 Earlier in the year, rumors began swirling around the possibility Apple might launch a version of iMessage for Android smartphones due to the company's increased focus on services, "which means opening up certain avenues beyond its own iOS and OS X platforms."

The original report pointed to a potential announcement at WWDC, which came and went with no such news, and an Apple executive later commented that keeping iMessage on iOS has the understandable advantage of helping sales for iPhones and iPads.

In a larger piece today discussing the degree to which iMessage's "stickiness" is acting as the glue to help keep users loyal to iOS, Daring Fireball's John Gruber briefly outlined these previous rumors and provided further fuel to the flames. Gruber mentioned that he's "heard from little birdies" that a handful of "detailed mockups" of iMessage for Android have been shared around Apple.

The user interface of the Android app is said to have gone through numerous designs, from one that looks identical to the version on iOS, to another that has a "pure Material Design," using Google's design language it developed a few years ago. Gruber still thinks iMessage on Android "might happen sooner or later," mainly because of iMessage's new monetized Messages App Store, which could net Apple increased income in its already profitable services category if it translated the app to Android.

I’ve heard from little birdies that mockups of iMessage for Android have circulated within the company, with varying UI styles ranging from looking like the iOS Messages app to pure Material Design.

Apple undoubtedly creates mockups for all types of products and services, the vast majority of which never make it to release, and it's unclear exactly how far along the iMessage for Android preliminary designs were at the time of their circulation through Apple, or when exactly that occurred. Still, Gruber notes that while an Android version of iMessage "may never see the light of day," even the existence of such mockups "strongly suggests that there's no 'of course not' to it."

Apple currently distributes three apps on the Google Play store for Android, including Apple Music, Move to iOS for users who are transitioning from an Android smartphone to an iPhone, and Beats Pill, an app used to interact with a Beats Pill speaker. Apple CEO Tim Cook has said Apple Music is Apple's way of testing the water ahead of bringing additional Apple services to other platforms, so it's a possibility that iMessage could be one of those services.

coolfactor
But where is the multi-party FaceTime? Such a disappointment that this capability was dropped when FaceTime was introduced. iChat was truly ahead of its time, I guess.
Score: 20 Votes (Like | Disagree)

ArtOfWarfare
I think Apple should bring iMessage to Windows before they bring it to Android.

They could just throw it into icloud.com - I already use that a lot for accessing my various iWork documents and Notes from my work computer.
Score: 19 Votes (Like | Disagree)

bluespark
Apple should do this, and quickly.

The problem with relying on "stickiness" is that it reveals a fundamental lack of confidence in Apple's products to sell themselves. Apple has to have courage that its products are good enough to sell even absent "exclusive" access to iMessage or, if it lacks that courage, make the products better. Otherwise, something better than iMessage will catch on anyway, and if Apple is relying on that to prop up sales, everything will evaporate at once.

Fidgetyrat
It really surprises me that there's so many messaging apps out there and not one has been universally adopted as a standard.
Score: 9 Votes (Like | Disagree)

Quu
The minute iMessage goes to Android is the minute I start looking at how to get that new edge to edge display Xiami phone in the UK.

iMessage is the only thing keeping me tied to iOS at this point, everything else can be done on Android.
Score: 7 Votes (Like | Disagree)
Read All Comments