Apple today released a new update for tvOS, the operating system designed to run on the fourth-generation Apple TV. tvOS 10.0.1 comes one and a half months after the release of tvOS 10 and marks the first minor update to the new operating system. tvOS 10.0.1 has been in testing since September 21, with Apple having seeded four betas to developers before releasing it to the public.

The new tvOS 10.0.1 update can be downloaded over the air through the Settings app on the Apple TV by going to System --> Software Update. Those who have automatic software updates turned on will be upgraded to the new operating system automatically. 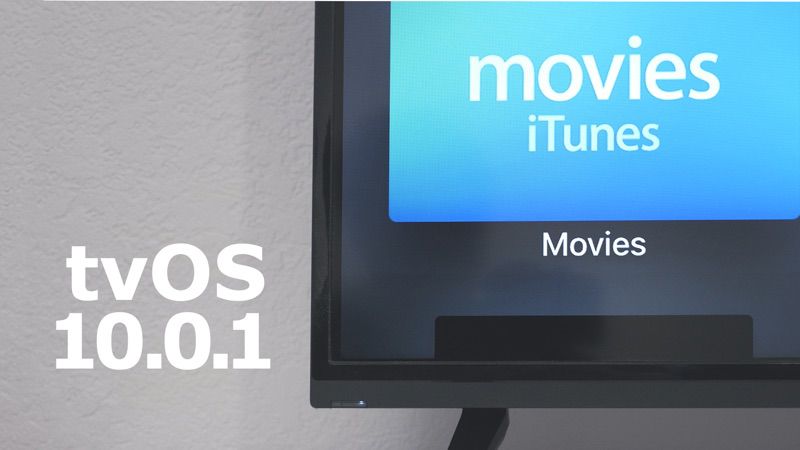 As a minor 10.x.x update, tvOS 10.0.1 focuses on performance improvements and bug fixes to address issues discovered since the release of tvOS 10. During the beta testing process, no major outward-facing changes or obvious bug fixes were discovered.

The tvOS 10.0.1 update does not include support for single sign-on, a feature that will allow Apple TV users to sign in once with their cable credentials to access all live cable content included in a cable subscription. Apple has said single sign-on will be introduced in a future update.

tvOS 10 brings improved search, expanded Siri capabilities, a new dark mode, a Continuity option for using the iPhone for text input, automatic download of universal apps, easy access to live TV, and more. For full details on what's new in tvOS 10, make sure to check out our tvOS 10 roundup.

Chris in DC
Hurry up with single sign-in, Apple, and save me from repetitive sign-in hell!
Rating: 13 Votes

6836838
Swiping is still a mess with AppleTV. Not consistent at all other Apple devices.
Rating: 5 Votes

I hope this fixes...not even fixes, ENABLES the keyboard continuity!

I didn't realize there was an issue. Mine comes up everytime.
Rating: 3 Votes

I feel like a full-time tech support guy trying to deal with all of the constant Apple updates that happen to all of the Apple devices around the house and I'm sick and tired of it.


It is a different world now when it comes to Apple products. "It just works" is no longer the case.

It is funny, all the things I used to complain about MS, and other Apple competitors, is now becoming the same complaints I have about Apple.
Rating: 2 Votes

vertical smile
I have been having laggy swiping and random app crashing issues since tvOS 10.

I am hoping this fixes those issues.

Also, I noticed that extended use of the YouTube app tends to bring out all sorts of bugs and crashes on the home screen and other apps.

Anyone else experiencing this?

Btw, a restart seems to temporarily fix many of the bugs.
Rating: 1 Votes

bluespark
Any audio passthrough option yet?

I just bought a Roku at about half the cost of the ATV 4 and it's quickly becoming my go-to device. Unlike the ATV 4, it "just works."
Rating: 1 Votes

I hope this fixes...not even fixes, ENABLES the keyboard continuity!


Mine wasn't working at first either when I first updated to tvOS 10, but after a week or so it just started popping up on its own and it always has now ever since.
Rating: 1 Votes

TwoBytes
I hope this fixes...not even fixes, ENABLES the keyboard continuity!

Thanks but it's not the app, it's the 'inbuilt' feature that was released. It should be a popup on iOS when you use a text input field

Try having your iPhone unlocked to the home screen before you swipe to a search field. It's works, but it's a bit spotty rt now. I think it doesn't recognize a connected iPhone when the phone is in sleep.
Rating: 1 Votes

The tvOS 10.0.1 update does not include support for single sign-on